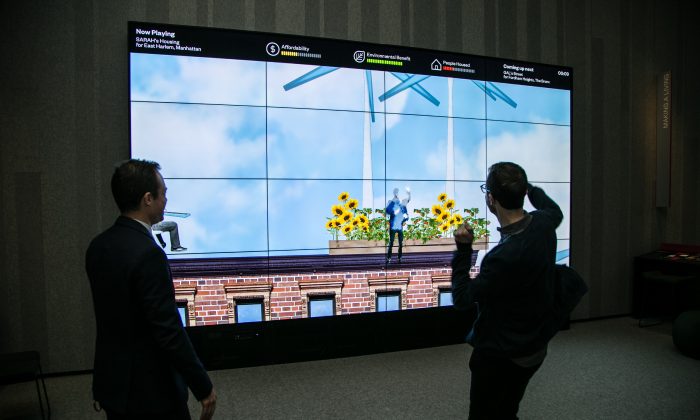 Visitors can design a street or a park using a touchscreen panel and then interact with their design that is projected on a giant digital wall at the new exhibition New York at It's Core in Museum of the City of New York. (Benjamin Chasteen/Epoch Times)
New York

NEW YORK—The Museum of the City of New York was founded in 1923 to tell and preserve the history of the city. For a long time now, the museum has had the ambition to hold a comprehensive exhibition on New York City—admittedly, a monumental task.

In the last five years, museum staff tackled it in earnest. But how does one go about interpreting 400 years of history?

“We went through a whole process of contemplation and debate and discussion about what we really felt defined New York,” said Sarah Henry, curator-in-chief at the museum.

These concepts became the framework for the exhibition and the four lenses through which to examine the city. The goal was not to give an encyclopedic account of New York, but to provide something truly educational. The exhibition, New York at Its Core, opened Nov. 18.

“For example, money, which is our starting point—it’s been a defining characteristic since the beginning,” Henry said. “Unlike Massachusetts Bay, which aimed to be a city on a hill, or Philadelphia, which is the city of brotherly love, New York was created as a for-profit enterprise by the Dutch India Company. It was about money from the very beginning.”

The exhibit spans three galleries on the first floor, with nearly 450 historical objects on view, plus interactive stories and maps. The exhibit focuses on the events and people who shaped the city, and their stories are shared via interactive screens.

Gallery 1, titled “Port City, 1609–1898,” tells the story of Henry Hudson’s journey and discovery of the five boroughs, the colonists’ relationship with the Lenape (also known as the Delaware Indians), and the social climate of the time.

Gallery 2, titled “World City, 1898–2012,” aims to depict how the city became the global metropolis it is today. Along the sides of the exhibit, major events are highlighted: the Great Depression, the postwar urban crisis, 9/11, Superstorm Sandy—tragedies that affirmed the city’s resilience. In the center, touchscreen displays allow visitors to “meet” trailblazers of the era, like Andrew Carnegie, Gloria Steinem, and Jay-Z.

Gallery 3, the Future City Lab, enables visitors to design the future of the city, addressing sustainability, diversity, and economics. A digital map of New York shows nearly 100 sets of data with projections to 2050.

“We want people to understand that New York has been shaped by human agency, that it wasn’t inevitable that it turned out the way it did,” Henry said. “And to understand how it’s changed over time: What we have here now is not the way it’s always been, and it’s not the way it always will be. Change is the only constant in New York.”