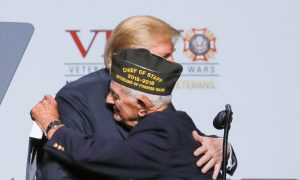 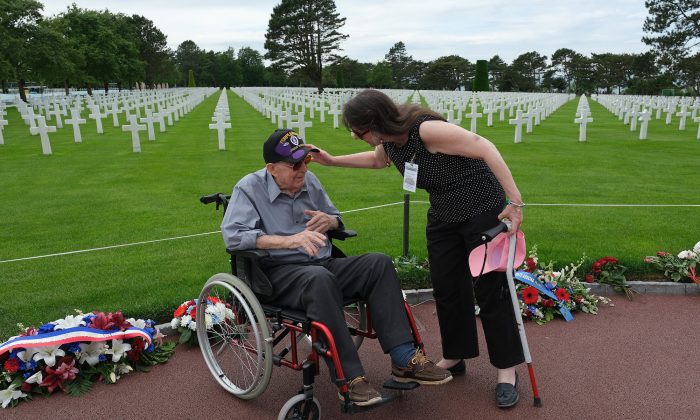 PARIS—A Quaker and pilot from Edinburg, Texas, 1st Lieutenant Joseph Heacock refused to bear arms for religious reasons, but he flew a P-38 on missions as a member of the 33rd Photographic Reconnaissance Squadron—including on D-Day.

A former elementary school teacher from Morrisville, Pennsylvania, Tec 5 Mary Schulyer had what might seem to be a mundane job at a mail-sorting post, but the letters she helped deliver proved key to propping up the morale of homesick GIs.

Heacock and Schulyer are both buried at the Cambridge American Cemetery in England, along with more than 3,800 other U.S. soldiers who lost their lives during World War II. Across the English Channel, another American military cemetery, the Normandy American Cemetery, provides a final resting place for more than 9,000 people, most of whom lost their lives in the D-Day invasion and subsequent battles.

Cambridge and Normandy count among the 26 U.S. military cemeteries and 30 memorials in more than a dozen countries administered by the American Battle Monuments Commission (ABMC), a U.S. government agency. Most commemorate the service of Americans in World War I and World War II.

The ABMC is focusing more on telling the stories of individuals such as Heacock and Schulyer, and groups such as black engineering units, and the 32 neighbors from Bedford County, Virginia, who are all buried at Normandy.

Bedford was the place that “suffered the most on D-Day, proportionally speaking,” said Anne-Sophie Navet, an interpreter at the Normandy American Cemetery. “It remains a symbol.”

The focus on storytelling represents a shift in the agency’s mission and its “target audiences,” said Jerry Lefler, deputy director of cemetery operations. “ABMC is making a transition from a mourning to a commemorative agency.”

The original target audience for ABMC cemeteries consisted primarily of veterans and family members. “It is still our first mission,” said Flora Gueguen, another interpreter at the Normandy American Cemetery. “Relatives come here, and we escort them to the graves. It is always a special moment.”

With the passage of time, the number of people on personal pilgrimages has naturally dropped. “Most of the direct relatives of people from World War I and World War II have passed away,” said Lefler. “How do we keep our cemeteries, our story, and the stories of those buried there relevant?”

About a dozen years ago, the ABMC began to recognize the need to add an educational element to its program to introduce younger generations to some of the history behind all the casualties. The agency began collecting stories and artifacts, including photographs. The first visitors center was inaugurated at the Normandy American Cemetery in 2007. A half-dozen others have since been established.

The ABMC also invested in telling stories in an engaging way. Many local staff members received training according to the guidelines of the National Association for Interpretation, a membership organization based in Fort Collins, Colorado. Now retired, Bill Gwaltney was hired as an interpretive coach. He made the rounds of European sites to work with “interpreters,” who he insists are much more than mere guides. He argues that they help provide context and meaning by using a combination of “social science, education, and storytelling.”

He compared their work to “arranging a musical score.”

Here’s how it works in practice, according to Constant Lebastard, cemetery associate at the Aisne-Marne American Cemetery, a World War I site in France: “We speak to people for about an hour,” she said. “We don’t only talk about the cemetery but we also focus on the men. We use them to tell a story.”

Lebastard added, “We are not teachers. We give people an idea of what happened and make people think.”

At the Cambridge American Cemetery, Suzie Harrison, an interpretive guide, provides context about the “friendly invasion” of England by troops from the United States and elsewhere in preparation for D-Day.

“If you think about it as a narrative, we are chapter one, and Normandy is chapter two,” she said. “People don’t realize what happened here over the course of two years.”

Harrison tells visitors about racial segregation in the U.S. military—black engineering units built airfields that were essential to the D-Day operation. What happened in the military during World War II served as “a precursor to the Civil Rights movement,” she said. “There is a lot to talk about.”

Visitors often ask if anyone famous is buried in the graveyard, Harrison said. Many sites feature a Wall of the Missing with names of people whose remains were never recovered or identified. The list at the Cambridge American Cemetery includes big band leader Glenn Miller and Joseph P. Kennedy Jr., the brother of President John F. Kennedy.

Fame depends on the audience.

“There is no point in telling the story of Glenn Miller to a group of 10-year olds,” said Harrison. “When [visitors] ask about famous people, we say they are all famous.”