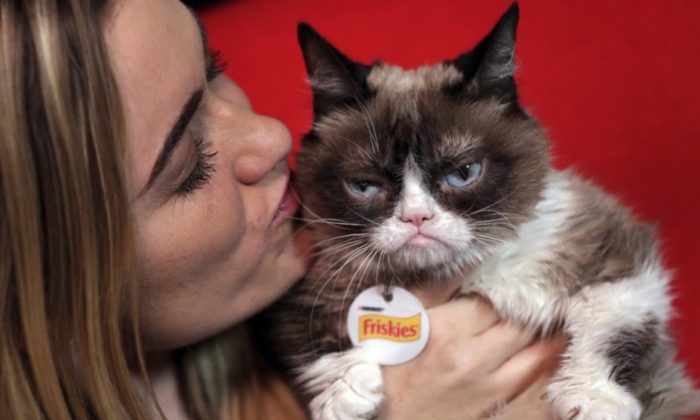 A feline of legendary internet fame for her permanent sour look has died.

Grumpy Cat, from Arizona, died at the age of 7, her owner has revealed.

The cat that “helped millions of people smile” died after complications from a urinary tract infection “became too tough for her to overcome,” owner Tabatha Bundesen and her brother Bryan said in a statement.

According to the statement, Grumpy Cat—whose real name was Tardar Sauce—passed away on Tuesday, May 14, “at home in the arms of her mummy.”

“Besides being our baby and a cherished member of the family, Grumpy Cat has helped millions of people smile all around the world—even when times were tough,” read the statement from the cat’s family, shared on Twitter on Friday morning.

“Her spirit will continue to live on through her fans everywhere.”

Some days are grumpier than others… pic.twitter.com/ws209VWl97

The Instagram account associated with Grumpy Cat has over 2.4 million followers, billing the sourpuss as “The World’s grumpiest cat!”

Grumpy shot to online fame in 2012 after Bundesen’s brother, Bryan, posted a photo of her on Reddit, where people became enamored with Grumpy’s permanent frown.

The look that catapulted the cat to fame, according to The Associated Press, is caused by an unusual combination of feline dwarfism and underbite.

Over time, the cat became a merchandising machine, selling everything from iced coffee, to Friskies cat food, to perfume.

“Combined with Demeter, one of the most successful online fragrance brands in the world, Grumpy Cat’s Limited-Edition Kitten Fur will bring scent memories and smiles to more people and places than ever before! And everyone needs more smiles!”

Product reviewers on the page laud the fragrance, with Margaret M. writing, “This is a soft, warm and sensual scent. I wear it often. The scent lasts all day. I also want to make note of Demeter’s great Customer Service.”

Commenter “Rose” said “I love the scent” but suggested their transactional system had kinks to iron out: “Kitten Fur is the cat’s meow…but they billed me double!”

It’s Grumpy Cat’s Birthday and she’s decided to give 50 people a roll-on bottle of her new “Kitten Fur” fragrance by @demeterceo ! 1. Follow @realgrumpycat & @demeterceo on Instagram! 2. Leave a creative comment on this post wishing Grumpy a terrible birthday! 3. That’s it! Grumpy will help select 50 winners next week! See the whole collection now at: https://demeterfragrance.com/grumpy-cat.html #HappyBirthdayGrumpyCat

The cat’s rise to stardom included multiple television appearances and even her own 2014 Christmas film.

The BBC reported that in 2015 Madame Tussauds in San Francisco even unveiled Grumpy Cat’s wax replica.

Heartbroken fans have taken to social media to express their condolences.

One person wrote: “Thanks for the laughs, the memes & for just being a rad kitteh.”

“Thank you for making the world smile, Grumpy Cat ❤️ You will be dearly missed,” another commenter wrote.

“The grumpiness will survive through us all,” another wrote, “everything from the merch to the memes that started it all. She was a special little kitty, and had a beautiful home during her stay here. Rest in peace, you sweet little grump.”

According to earlier reports, a California jury awarded Grumpy Cat’s owner more than $700,000 in January of last year in a federal lawsuit over the use of the cat’s identity.

She signed on for the cat to endorse a “Grumpy Cat Grumpuccino,” but the company subsequently used the cat’s image to help sell other products, which an eight-person jury found was unauthorized.

Bundesen previously worked as a waitress before her beloved pet gained internet stardom. She has told the Express newspaper that she quit her job “within days” of Grumpy’s first appearance on social media.

According to HuffPost, Grumpy is believed to have a net worth of at least $1 million.