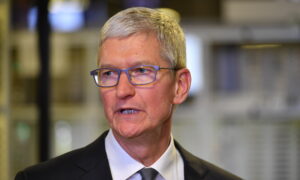 Online giants including Facebook and Google have started cracking down on what they consider “fake news.” Online advertisement services, including some beyond those owned by Google and Facebook, are rejecting ads for news outlets that are deemed to violate rules on “hate speech.” Twitter has also begun to ban accounts of users it associates with the vaguely defined group of anti-establishment conservatives defined as the “alt-right.”

Just following the election, a large swath of news outlets—including The New York Times, Buzzfeed, Fortune, and others—began publishing stories on how “fake news,” mainly on Facebook, allegedly helped Donald Trump win. They began pointing to a list of trusted and fake news sites, published by Melissa Zimdars, an assistant professor of media studies in Merrimack College in Massachusetts.

The list, which has since been edited to remove names of media outlets, claimed that “fake news” sites included Project Veritas—which had published videos that exposed backroom dealings in the Clinton campaign during the election—along with other often right-leaning websites including WND, Zero Hedge, Breitbart, Daily Wire, and others.

Facebook CEO Mark Zuckerberg initially responded to the reports by saying, according to Fortune, “I think the idea that fake news on Facebook—of which it’s a very small amount of the content—influenced the election in any way is a pretty crazy idea.”

Facebook soon followed on Nov. 14 by banning “fake news” websites from its advertising network, and Zuckerberg announced on Nov. 19 that he was weighing other options. These could include, he said, labeling stories flagged as fake, changing ad policies to deny money to sites with fake content, and bringing in third parties to fact check organizations.

Google made a similar move and also announced on Nov. 14 it would ban “fake news” sites from using its advertisement network. It said, according to Reuters, “Moving forward, we will restrict ad serving on pages that misrepresent, misstate, or conceal information about the publisher, the publisher’s content, or the primary purpose of the web property.”

Twitter also took action. It said it would crack down on hate speech, and began banning accounts of people tied to the “alt-right,” including many prominent alt-right accounts.

Many of the sites labeled as “fake news” fired back, claiming they were being censored. Former Congressman Ron Paul (R-Texas) released his own list of 13 outlets that he said carried “fake news” and listed major outlets including The New York Times, CNN, and Politico that emails released by WikiLeaks showed had colluded with the Clinton campaign.

While it’s still unclear how things will unfold, many experts have noted the events could soon decide which types of news outlets can afford to stay in business and what type of news will be shown to the public on Google, Facebook, and Twitter, which have become chokepoints for the information we consume.

Chris Mattmann, who co-created some of the technologies at the heart of the internet and search engines and is now a principal data scientist at NASA’s Jet Propulsion Laboratory, said, “From a tech perspective, I don’t think technology companies are well equipped to make those types of editorial decisions.”

The problem with trying to label some news as real and others as fake, he said, is that “in order to properly source things in this environment, you need to read everything.”

“In a way, how can you trust anything forever?” he said, noting that many news outlets are owned by major conglomerates that have known biases. He also shared the perspective that tech companies like Google and Facebook likely did not intend to become news outlets.

Mattmann believes that if companies are going to censor user content, it needs to be done with heavy transparency—and possibly using open source code that everyone can see—if they’re going to retain user trust.

According to Jillian York, director for international freedom of expression at the nonprofit Electronic Frontier Foundation, it’s within the rights of Google, Facebook, and Twitter—all being private companies—to filter user content as they see fit.

She warned, however, that if companies do censor users and content from specific news websites, “I think there are inevitably going to be people calling for government regulation.”

This could lead to a shift in U.S. law, where government would step in and tell online companies how to handle calls for censorship and vetting of content. In an environment where governments in many parts of the world heavily regulate what people can or cannot say the internet, this is a slippery slope.

“I think this is the time for companies to start listening to their users,” York said.

There is also the chance that people will simply find another service to use—and it appears this is already happening.

According to Utsav Sanduja, chief communications officer at Gab, a Twitter alternative that is strongly opposed to censorship, their service has seen a spike in new users. The service, which is still in beta, has more than 53,000 active users, and another 172,000 on its wait list.

The social network has also been labeled by several news outlets as being “alt-right,” but Sanduja notes they only recently started getting users who fit that brand. Sanduja himself is a Hindu, and the company is co-owned by a Christian and a Muslim. He said a large chunk of their users are from other countries, including India and Brazil, where people aren’t able to speak freely about their governments.

Is Someone Really Trying to Find Out If They Can Destroy the Internet?

Gab takes a different approach to censorship. While it will remove content that violates the law, its main approach is to put filtering into the hands of users. If someone doesn’t like content from certain people or websites, or want to avoid specific keywords, they can tell Gab to simply not show them that content. With this approach, Sanduja said, “We’re actually following the beliefs of the non-aggressive principles.”

Sanduja said their stance is simple: “Morality is subjective.”

“Everybody’s morality is different from each other,” he said.