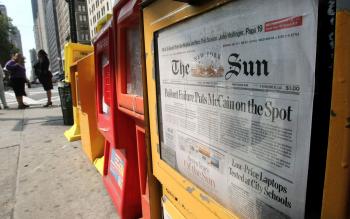 The Internet has left print newspapers far behind as the source for national and global news, especially for people below the age of 30.

In 2008, 59 percent preferred the Internet, while 28 percent hung on to the old-fashioned method of reading a newspaper, according to a recent statement by the Pew Research Center for the People & the Press, a Washington, D.C.-based public opinion research organization.

However, popularity of local community newspapers has not waned. More than 85 percent of people over 18 years old read local papers, according to the 2008 National Newspaper Association (NNA) survey, recently published by the Donald W. Reynolds Journalism Institute. NNA is a not-for-profit organization for the newspaper industry.

Media experts bemoan the decline in newspaper readership. But they usually refer to the large, national print media organizations.

More than 71 percent of readers make purchasing decisions based on community newspaper advertisements. Readers look for sales specials, news relevant to the community, and anything that addresses the local social and political landscape.

“It’s very clear that newspapers provide a very strong connection between local readers and local businesses and services … Community newspapers help both buyers and sellers,” John Stevenson, president of the NNA, said in a recent statement.

Americans 45 and over—and especially those over 65—tend to read print newspapers more frequently. The younger crowd gets their news online, according to a recent comScore Inc. study. comScore is a Reston, Va.-based marketing research company.

In 2008, Internet news Web sites gained about 7.3 million, or 12.1 percent, more readers than 2007. Total readership rose to 67.3 million in 2008, according to a recent Newspaper Association of America (NAA) press release.

“Newspapers’ digital audience has grown 60 percent in the last three years as the newspaper Web sites continue to attract sophisticated readers who demand comprehensive news and information that no other medium can match,” John F. Sturm, president and CEO of NAA said in a recent statement.
Sturm suggests that the move to the Internet has more to do with its speed and convenience than losing trust in the integrity of print journalism.

“Newspaper companies are driving revenue by focusing on their core competencies—feet on the street and local relationships … Newspapers are adjusting their business models and their traditional ways of going to market to generate new revenue streams and more effectively compete in today’s media landscape,” Randy Bennett, a senior vice president at NAA said in a release.

To help attract a younger audience, NAA introduced “Moving to Mobile,” a tool that teaches newspaper managers how to bring their content to mobile devices.

The New York Times has an application for Apple’s iPhone smartphone, one of the most popular mobile devices for the under-35 crowd.

Many of the largest U.S. newspaper companies took on debts that have become almost impossible to pay back in today’s troubled financial environment, as subscriptions and advertisement revenues continue to fall.

The Tribune Co., owner of the Chicago Tribune and the Los Angeles Times, was first among the newspaper giants to file for Chapter 11 bankruptcy in December 2008. The company was saddled with millions of dollars in debt.

The New York Times Co., publisher of the New York Times, the International Herald Tribune, and the Boston Globe, had to borrow $225 million against its Manhattan headquarters building. Banks are also considering pulling its two revolving working capital credit lines this year.

Lenders for the Pennsylvania-based Journal Register Company—which defaulted on its debt—opted not to restructure or forgive the media company’s debt. There is a possibility that they may call the entire loan, resulting in Chapter 11 bankruptcy or even Chapter 7 liquidation.

Moody’s downgraded MediaNews Group, one of America’s largest news conglomerates, from a credit rating of “Caa1” to “Caa3” with a negative outlook, given the company’s $962 million in bonds and poor financial performance. Moody’s downgrade indicates that there is “substantial risk” of default. A “Caa3” rating suggests a 72.9 percent possibility of default on outstanding loans.

Newspaper publishing companies with a high likelihood of default, as reflected by S&P and Moody’s ratings, include Morris Communications Company LLC and the McClatchy Company, one of the oldest and largest newspaper publishers in the United States.

The Battle for Survival

Some industry analysts suggest that print media companies must cut ties to large corporations and restructure their directors—many of whom are from large financial firms or law firms.

“Such ties may have adverse journalistic consequences. Some of these may be subtle—unconscious self-censorship, for example. In other cases, the consequences have been manifest—reporters pressured, stories unassigned, or killed when written,” according to a 2004 Journalism & Mass Communication Quarterly article.

Drastically revised or totally new business plans is the only way for the print newspaper to survive, suggest professors in a Knowledge @ Wharton (KW) article titled “Urgent Deadline for Newspapers: Find a New Business Plan before you Vanish.”

“Someone will have to come up with a business model that pays for the sometimes costly work of gathering news while also squeezing a profit out of a readership whose options include the entire World Wide Web,” the experts said in the KW article.