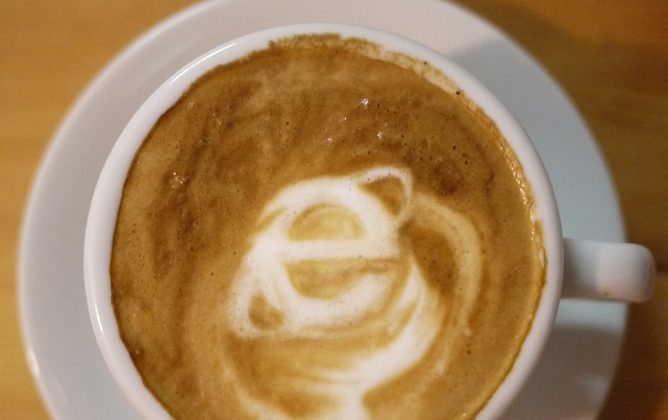 The end of IE? Wake up and smell the coffee. (yukop, CC BY-SA)
Tech

Internet Explorer: Reports of Its Death Are Greatly Exaggerated

There are claims that Microsoft is to retire its Internet Explorer web browser and replace it with an all-new browser called Spartan with the upcoming release of Windows 10.

As of February 2015, Internet Explorer’s (IE) market share slipped to second place with around 17%, while Google’s Chrome browser boasted more than 42%. One clear challenge for Microsoft is that it has always been committed to producing its own browser for its own Windows operating system (supporting IE on Apple Macs for a brief period). Apple on the other hand is happy to produce versions of its Safari browser for both Mac OS X and Windows, and Google produces versions of Chrome for every popular desktop and mobile operating system.

Perhaps Microsoft feels it’s time to take some action – in which case what is it trying to accomplish?

IE was introduced as an add-on for Windows 95 and was a key part of the internet boom of the 1990s. Bundled free in all subsequent versions of Windows, it soon gained dominance, winning the browser war against its older competitor, Netscape.

With a browser share that grew to be as substantial as Microsoft Windows’ dominance of the operating system market, Microsoft was subject to numerous anti-trust litigation cases in the US and Europe. Nevertheless some of the HTML elements introduced in IE, and the fact it was more forgiving of badly coded websites than Netscape, meant that IE had a lasting influence on web design and the way websites were designed. This was especially so for internal corporate websites, which often used Windows-based systems.

In the 2000s, disquiet over Microsoft’s anti-competitive behaviour and IE’s lack of proper standards support led to a flourishing of competitors, boosted by the open sourcing of Netscape, which would become the basis for the popular Firefox browser. In reaction to Microsoft’s approach of pushing its own technologies and ignoring open standards, the appeal of more rigorous web standards compliance demonstrated by other browsers including Opera, Safari and Chrome have since carved away at IE’s dominance. Additionally, IE became one of the worst offenders for security vulnerabilities. Since then, it’s become the browser everyone loves to hate.

Time for a RealitIE Check

Trident, Internet Explorer’s layout engine which turns HTML and code into readable web pages, is showing its age. Benchmarking sites show that it is the performance laggard of the competing products. It took until 2008 and Internet Explorer 8 before the browser passed the web standards compliance test, Acid2.

With 20 years of history, Microsoft’s hands are to some extent tied by the many organisations that have created web-based programs that rely on IE, or on particular implementations of features in certain versions of IE. Even versions changes can introduce problems; switching to a new browser and layout engine altogether is something else.

Whenever new applications, operating systems or technologies in general are introduced, there is always the demand for backwards compatibility due to the considerable investment in developing services to run on corporate systems, or on products built for others, dependent on IE-specific features. By failing to properly support and adhere to open standards throughout its long history, Microsoft has made a rod for its own back.

As stated in a Microsoft developer blog, the new Spartan browser will be based on the relatively standards-compliant Internet Explorer 11 engine, but purged of all the code required to support this 20-year legacy. The result is, one hopes, a modern layout engine that adheres to modern standards.

Spartan will, when required, load in the older Internet Explorer engine for backwards compatibility. So the question one might ask is, with so many older IE-compatible sites out there, how often will Spartan be using its new engine, and how often will it relapse to Internet Explorer’s Trident to perform its duty for legacy systems? This means two sets of code to maintain and keep secure. And with Trident living on inside Spartan, to what extent can IE truly be considered “dead”?

Microsoft have a long way to go to improve their web browser performance, but this is certainly a step in the right direction – even if, with a 20-year-legacy millstone around their neck, they may find themselves held back from further progress for some time to come.