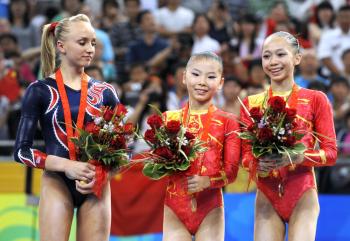 United States' Nastia Liukin (L), China's He Kexin (C) and China's Yang Yilin (R) pose after the women's uneven bars final of the artistic gymnastics event of the 2008 Olympic Games in Beijing on Aug. 18, 2008. Both He Kexin and Yang Yilin were accused of being too young to legally compete. (Kazuhiro Nogi/AFP/Getty Images)
China

More evidence has surfaced that gold medal winner He Kexin is underage, but information about the gymnast is fast disappearing from the Internet.

Hacker “stryde.hax” identified He Kexin with the birth date January 1, 1994 in a cache on Baidu, the largest Chinese search engine. This would make her 14 years old and under the eligible age of 16 for Olympic competition. It is reported He Kexin's Chinese passport states her birthdate is January 1, 1992.

Stryde.hax says that all the documents personally unearthed, and that show He Kexin with the 1994 birthdate, have "gone down the memory hole."

Video's of He Kexin on YouTube have also been removed.

Why bother removing the original documents if they were in fact false? stryde.hax asked, raising concerns of Internet censorship.


“At this point, I believe that any reasonable observer already understands that age records have been forged. This story now is really about Internet censorship, the act of removing evidence while at the same time claiming that the evidence is wrong. For the first time I watched search records shift under my feet like sand, facts draining down a hole in the Internet. Will this stand?”

Google's cached copy of the spreadsheet does not contain Kexin's age record, and Baidu's does, Stryde.hax said, presenting the possibility that Google has allowed its data to be rewritten by Chinese censors.

Stryde.hax, who is reported to work for a US-based internet security company when not hacking, had earlier posted a cached document: the “2006 Nationwide Gymnastics Registration Table,” which identifies He Kexin with the 1994 birthdate.

On the more recent documents, she is also clearly identified as the winner or ‘first note’, casting away doubt that the 14 year old He Kexin might be a different girl.

Research by the Epoch Times shows that a number of He Kexin’s videos on YouTube have been removed. One video was meant meant to be a documentary with English subtitles. The error message now reads: “This video has been removed by the user.” Another link comes up with message: “This video is no longer available due to a copyright claim by a third party”.

Bela Karolyi, one of the world's top experts on female gymnastics, spoke publicly about his concerns of age falsification in the Chinese gymnastic team.

“These people think we are stupid…We are in the business of gymnastics. We know what a kid of 14 or 15 or 16 looks like. What kind of slap in the face is this? They are 12, 14 years old and they get lined up and the government backs them and the federation runs away. There is an age limit and it can't be controlled,” the Huffington Post reported him saying.

The tiny gymnast, who won the gold medal for women’s gymnastics on Monday August 18, was one of three Chinese gymnasts whos age came under media scrutiny before the games commenced.

The International Gymnastics Federation (FIG) was forced to issue a statement claiming the IOC had been satisfied with all the documentation pertaining to the age of the competing gymnasts.

"The FIG has received confirmation from the International Olympic Committee that all passports are valid for all gymnasts competing in the Beijing Olympic Games," FIG said in a statement.

Karolyi however scoffed at the response telling AP, "passports mean nothing."

Following these reports, the IOC has now asked the International Gymnastics Federation to investigate the ages of the Chinese gymnasts.