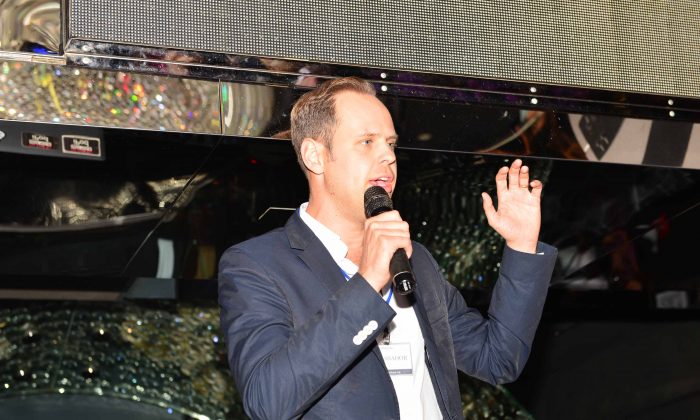 InterNations the Largest Multinational Expat Community in the World

In an exclusive interview with Epoch Times during his brief visit to Hong Kong at the end of October 2014, the founder and CEO of InterNations, Zeeck explained: “The big problem a lot of people have is being alone abroad and whenever you identify such a problem and manage to provide a good solution to it then it is very helpful to growing any kind of network.

“When we started we were global almost immediately as we had communities in 237 centres around the world—but they were empty. What we had to do was fill them!”

Just over one year ago in October 2013, Epoch Times reported that InterNations had logged up its 1-millionth member in just 6-years of operations. Twelve months later in October 2014 the family has grown a further 40 per cent to its current 1.4-million membership level. This is an amazing growth progression.

“Yes definitely” said Zeeck “but we could have grown much faster, but we always try to walk a thin line keeping the quality very high for the network and at the same time to reach as many expats out there as possible, limiting the people that join our network.

“This year we have not opened up any more communities, mainly, we have been growing through word of mouth, friends inviting their friends or recommending InterNations to anyone moving abroad or living abroad. We are also doing marketing primarily through Google so if someone is searching for an expat community he will find InterNations and come to our website. By this combination we drive more and more members to us.”

Zeeck went on to explain the scope for further expansion: “We think there are about 50 million people we consider as being expatriates that have some kind of university degree and are highly qualified, that live somewhere around the world. Now we have about 1.4 million members, out of these 70 per cent are expats and 30 per cent are locals that plan to work abroad or are repatriates that have just come back and don’t feel the same at home any more. So there is definitely plenty of room for growing further.

From an early age Malte Zeeck was interested in travel and had the opportunity to study in a number of different counties including America, Italy, Switzerland and Sao Paulo in addition to his home in Bonn, Germany. It was during his study years that he met and became friends with von Plato. After doing military service in Holland and Sardinia he did an MBA at University of St Gallen, Switzerland, worked as a flight attendant for Lufthansa travelling to many world-wide destinations, and worked as a television reporter for Spiegel TV, N24, CNN International and n-tv and ARD. He met up with von Plato again in 2007 and it was then that they decided there was a great need to provide a networking service to help expats moving from one country to the next to settle in and make friends.

InterNations has just completed a survey of about 14,000 of its members asking about various aspects of expat life: Quality of Life, Ease of Settling in, Working Abroad, Family Life, Personal Finance, Cost of Living as well as gender, age and nationality questions. Overall results show the top 10 destinations to be: Ecuador, Luxembourg, Mexico, Switzerland, USA, Singapore, Spain, Philippines, Australia and Hong Kong.

Friendliness to foreigners and easy of settling in pushed Ecuador to head the list of 61 locations covered.

“The reason that Ecuador is so popular with expats is that it is perceived that people in Ecuador are very friendly towards foreigners. Settling in is one element that makes Ecuador really popular. Other nations like Switzerland for example which is also a very popular country in terms of quality of life and income, salary is high but people find it harder to settle in to make friends and that component for us is very important. How you really feel as an expat is very much determined by the level of integration you have in the country and it is particularly strong in Ecuador.

“We see that trend in a number of South American countries and also in southern Europe in countries like Spain and Italy. The feeling that we get from our members is that the locals are very friendly there, open and very welcoming towards foreigners living there.

The general impression gained from current media reports is that Mexico is a very unsafe place to be, but this was not reflected in the survey results as it finished in 3rd place.

“We also considered how people feel safe in countries and the expats there according to our survey did not, to a very high degree, say we feel completely unsafe here. Now if that is because they are living in expat bubbles or because they are very far apart from where the dangerous drug wars are happening I couldn’t tell but it seems they do not feel unsafe.

Hong Kong was placed a commendable 10th out of 61 overall locations whereas China was down the ranking at No.38. Zeeck’s commented on the China situation.

“The survey for China ranks 4th for personal finance because on the one hand the cost of living is very low, but the income of the expats is very high so that’s why it is ranking very high in personal finance index. But on the other hand it ranks poorly overall, one big reason is people have problems settling in and one prominent reason is language; many people have a hard time learning Mandarin but knowing the local language is important to get around in daily life, so this makes it really hard for expats initially to get started.

“Medical coverage is one big worry that members have in living in China. They don’t think medical, and also education coverage in terms of schooling is what they would like it to be. This is also a reason it is not ranking so high in our survey.

Zeeck is pleased with the way InterNations is developing in China: “InterNations is developing very well in China. We have now about 50,000 members in 10 communities in all of China—Shanghai, Beijing, Guangzhou, Suzhou, Lassa, Chongqing, Chengdu… Expats are coming to the events and are being very active and it seems that they like to meet up with the other foreigners in town and they like our events as they do not have so many other opportunities.”

Zeeck explained that this is the first big survey that InterNations has conducted. “We have not done a big survey like this before, but if we talk this time next year we will definitely see changes in what people say about where they live.”

Another new development in InterNations is that members are being encouraged to help with Social programs.

“InterNations is a for profit company but we have 1.4 million people that live a very privileged life, most of them have been to university and have good job positions and a good income. What I would like to do, and we are doing it already is to help people make a change at a social level as well. So we have introduced the InterNations volunteer program and the idea is to support [at least] one social project in each of our 390 communities through members giving time, through donations, through their know-how … and that is what we are doing. So now we have groups in 32 communities, we also have one in Hong Kong, the idea is that our members get involved with the NGOs. It is different NGO’s that we are supporting: in Beijing it is Autistic Children, in Hong Kong it is (1) Hope Worldwide and (2) St James Settlement, in Munich it is refugees, in New York it’s the Soup Kitchen. So that is what we are doing and that is what we want to roll out on this platform.