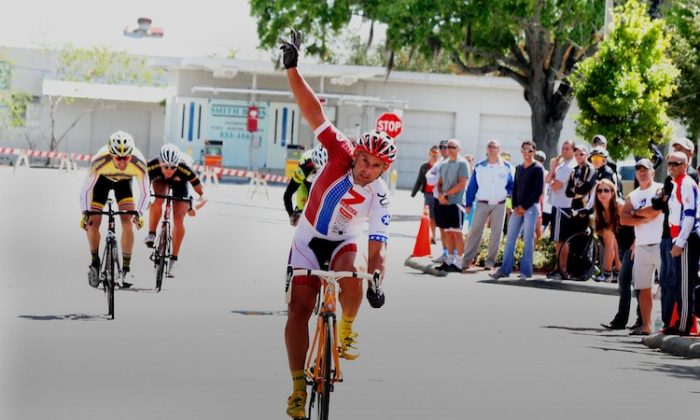 WINTER HAVEN, Fla.—Winter Haven, Florida is a small Central Florida town midway between Tampa and Orlando. As a rule, tourists come for lower-priced hotels in ready reach of Disney World and the famous Gulf Coast beaches.

One day a year though, bicycle stars descend on the town to do battle on its downtown streets, rushing past the library, the restaurants, and the coffee shops in tight packs at 40 mph—all in the name of charity.

The event that draws these cyclists is the Chain of Lakes Cycling Classic, a three-stage, two-day race on the roads of Polk County on Saturday and through the downtown streets on Sunday. All proceeds from the event are donated to the Polk County Humane Society, the region’s only no-kill shelter.

The riders aren’t thinking of adopting dogs and cats when the race is on, of course. Once the starter shouts “Go!” it’s all-out competition.

Several classes of riders compete: riders as young as ten or as old as—well as old as they want to be, can come out and race. And these racers are serious—they fight for position on every lap of every race, twisting through the narrow streets inches apart at amazing speeds, passing and being passed and fighting back to the front again.

Sunday featured several exemplary races: the Cat 3, Cat 4, and Women’s race all offered multiple lead changes and riders making amazing efforts, both individually and as teams, to come from the back or stay at the front.

The fastest race of the day was the Pro 1-2 race, which is the day’s main attraction for the fans. Pro 1-2 are the top classes, the fastest of the fast. This race attracts not only the fans but some very serious riders.

After escapes caught, attacks succeeded, and a tremendous late-race pursuit, Sunday’s race was won by zMotion team captain Grant Potter, a beast of a rider who was able to outsprint the field after 90 flat-out minutes—even though he had just raced in the 750-mile Vuelta Independencia Nacional in the Dominican Republic the week before.

After several attacks were ridden down, Potter joined the winning three-rider break with Derek Bennett of Florida Velo and Eric Stubbs of GearLink Racing. For a few laps it seemed that the leading trio would cruise to victory; then a four-rider chase developed.

This second group burned out with a few laps left; only one rider, Thomas Gibbons, pressed on. Gibbons, who doesn’t ride with a team, came close to catching the leaders—he rode the race’s fastest lap on the second to last circuit—but the effort of chasing solo drained him. He dropped back on the final half-lap, while Potter pushed to the front and won the sprint over Derek Bennett by 1.1 seconds. The top four finished within 1.7 seconds of each other.

“My teammate Joshua Thornton was covering a lot of moves early and I was sitting back,” Potter explained. “Then I saw when those two guys [Bennett and Stubbs] went, I jumped. It was really hard at the time, and the field hesitated, so I jumped—I knew if I could get a gap on this course, because there are so many turns, we could hold it.

“We could have lapped the field but I didn’t want to lap them. Florida Velo had ten guys and once we get involved in the field they would all work for that guy [Derek Bennett]. I only had one guy in the field.

“It was pretty tough but I knew once we got the gap that I could outsprint those guys even though my legs were shot because I just got back from the Dominican Republic on Tuesday, and that was 11 stages, 1200 kilometers so I died over there.”