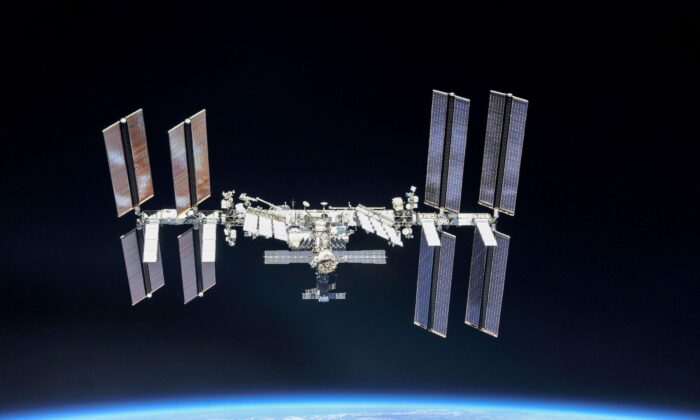 The International Space Station (ISS) photographed by Expedition 56 crew members from a Soyuz spacecraft after undocking, on Oct. 4, 2018. (NASA/Roscosmos)
Space

International Space Station Could Be Taken out of Orbit in 2031, Crashed Into Pacific Ocean: NASA

NASA will keep operating the International Space Station (ISS) until the end of 2030, after which it could be taken out of orbit in January 2031 and crashed into a remote part of the Pacific Ocean known as Point Nemo, officials have said.

According to newly published plans (pdf) detailing the next decade of goals for ISS operations, which will eventually lead to a “smooth transition to commercial services,” the ISS will be crashed into an area known as the South Pacific Oceanic Uninhabited Area (SPOUA), also referred to as Point Nemo.

Point Nemo is located 1,670 miles (2,688 kilometers) from Antarctica, the farthest point from any landmass, and it’s estimated that more than 263 spacecraft and satellites have been sunk there since 1971.

Once there, ISS operators will “perform the ISS reentry burn, providing the final push to lower ISS as much as possible and ensure safe atmospheric entry.”

NASA’s report said that its latest budget estimate assumed that the deorbit would happen in January 2031, although these assumptions and the associated costs, which include space transportation costs, will “continue to be refined each budget cycle.”

The ISS is a large spacecraft in orbit around Earth at an average altitude of approximately 250 miles. It travels at 17,500 mph (28,163 kph), meaning it orbits Earth every 90 minutes and can support a crew of six people, as well as visitors.

It was designed for human beings to have an ongoing presence in space, and the station’s unique science laboratory means that astronauts and cosmonauts of several nations are able to conduct scientific research that could not be done anywhere else.

Since then, the station, which has the volume of a five-bedroom house or two Boeing 747 jetliners, has allowed more than 3,600 researchers in 106 countries to conduct more than 2,500 experiments.

NASA said that while ISS has served to support deep space exploration, commercially operated space platforms would replace the ISS in the future amid a “thriving space economy.”

“The private sector is technically and financially capable of developing and operating commercial low-Earth orbit destinations, with NASA’s assistance. We look forward to sharing our lessons learned and operations experience with the private sector to help them develop safe, reliable, and cost-effective destinations in space,” said Phil McAlister, director of commercial space at NASA Headquarters in a statement.

“The report we have delivered to Congress describes, in detail, our comprehensive plan for ensuring a smooth transition to commercial destinations after retirement of the International Space Station in 2030.”

NASA said goals for the next decade include using the ISS as “analog for a Mars transit mission,” and validating “critical exploration technologies such as Environmental Control and Life Support Systems (ECLSS) that are most effectively conducted on ISS,” according to the report.

“This third decade is one of results, building on our successful global partnership to verify exploration and human research technologies to support deep space exploration, continue to return medical and environmental benefits to humanity, and lay the groundwork for a commercial future in low-Earth orbit.”

“We look forward to maximizing these returns from the space station through 2030 while planning for transition to commercial space destinations that will follow,” Gatens added.