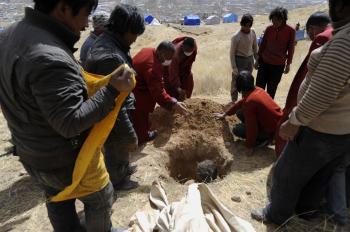 Civilian and international rescue teams have been denied access to regions hit by the earthquake in Qinghai. All roads to the quake-affected region in Yushu County from Qinghai’s capital of Xining were shut down on April 16.

Despite the escalating tragedy, a team from Japan—a country with considerable expertise in earthquake rescue work was also denied access. However, according to an announcement made by the Japan Ministry of Foreign Affairs on April 15, at the request of the Chinese government, Japan has agreed to donate one billion JPY (US$1 million) to aid rescue work in the earthquake region.

The quake-affected regions are under strict military surveillance, and civilian volunteer groups, including those from Xining, have been denied access. Several volunteer groups are stuck at Xining, 522 miles from Yushu.

Further hampering efforts to help is the authorities’ directive that only those who are bilingual in Chinese and Tibetan are qualified to volunteer.

Currently, efforts are targeted at recovering bodies, and authorities are lacking resources to care for the survivors and the injured. With the lack of aid, the death toll is expected to increase. These victims are in urgent need of medical care, food, warm clothes, and lodging.

Volunteers in Yushu report that power and water supplies to Yushu have been affected. Some local residents have been managing to get power for emergency purposes from their cars.

“Over 10,000 tents were allocated, but only a small portion reached those who needed them: People started to snatch the tents away during the unloading,” a local official told The Epoch Times. According to reports from volunteers in Yushu, many elderly and children have died from exposure due to the freezing night temperatures.

Official figures put the death toll at 1,339. However, locals such as Ciren, a Tibetan who had been trapped in the earthquake debris and was quoted in a Liberty Times report, believe at least 10,000 may have died, and authorities are downplaying the numbers,

A report in the Ottawa Citizen quotes a monk, Ge Laidanzeng, who has been collecting bodies. He said that at least 1,000 bodies arrived at their monastery alone. He also estimated the death toll at 10,000.