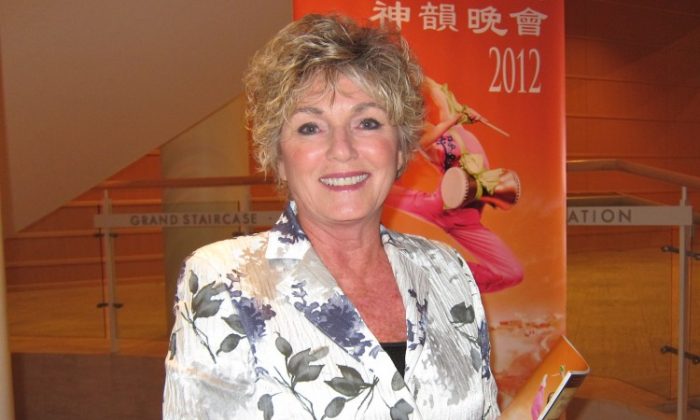 New York-based Shen Yun aims to restore China’s traditional values and culture through classical dance and song and brings that tradition to the world.

Ms. Melashenko expressed her amazement and said, “I felt that it was one of the best programs that I have ever seen in my life, it was just beautifully done. I just couldn’t believe how they danced all uniformly and just perfectly and the divine changes, all the costume changes. This is an outstanding performance. I hope they come here again.”

The spirituality inherent in classical Chinese culture deeply resonated with Ms. Melashenko. She said, “I saw a very clear parallel with the great controversy between good and evil here on the earth. I saw a real correlation there.”

She saw a message of hope in the performances, and said, “I interpreted the ending that, there is a savior, God is going to take us back home to Heaven. To me I saw that, it’s a very wonderful ending. God is the Creator … and that is what I came away with.”

“Over the past 60 years, this cultural treasure has been persecuted and co-opted by the Chinese Communist Party,” explains Shen Yun’s website. “It is outside of China that Shen Yun’s artistic creators have the ability to freely express themselves and their ancient culture.”

Ms. Melashenko was saddened to learn that New York-based Shen Yun cannot travel to China. “The narrators talked about how the people in the program are from all around the world, but they can’t go to China. I knew that, I’ve been to China, been to Beijing, I’ve been to the Forbidden City and so I know what’s happened in China. They’re sharing the Chinese history, and I think that it’s such a good thing.”

She praised the artists for sharing the cultural treasure of classical Chinese dance and music with the world, and said, “They do have such an incredible history. I think that it’s very good that they’re able to share everything, even though they’re not able to [go to China], because of the communists and talking about the divine and the Creator. I think it’s a very good that they do that.”

She said she would highly recommend Shen Yun to her friends. “Absolutely, absolutely! I just thought everything was so beautiful and I really, I would recommend it, definitely, to my friends. I hope they come here again!”