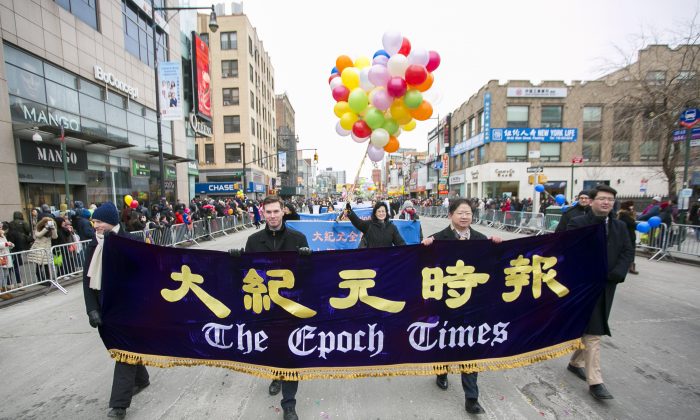 Local media outlets often love a parade, and parade goers love seeing their favorite TV anchors take part, making a connection with their audience not possible through a big screen’s pixels. With entertainment professionals and ample budgets, the local media are able to put on quite a show.

But it is unusual for an international media group to take part in a local parade, perhaps especially in a Chinese New Year parade in one of the New York’s outer boroughs. In fact, the Saturday parade in Flushing Queens sported just one such participant–the Epoch Media Group.

Publishing in 21 languages and 35 countries, Epoch Media Group certainly doesn’t limit itself to Queens, but chose to take part as it has a tradition in the community, explained Pamela Tsai, the group’s marketing director.

“Flushing is a very multicultural community with a lot of new immigrants coming from China,” Tsai said.

Epoch Media runs the largest and most widely distributed Chinese newspaper in New York City, the Dajiyuan—Chinese for “Epoch Times.” In fact, the group was initially founded by Chinese for Chinese “as the largest independent Chinese media in the U.S.,” she said.

“Lots of the Chinese people, they come here, they’re educated here, and they find a job and start a family, but, unfortunately, most of the Chinese newspapers that they read here in the United States are being controlled or influenced by the Chinese Communist Party,” Tsai said.

Many of the overseas Chinese media draw financial incentives from their ties with Beijing, according to a 2013 report by the National Endowment for Democracy.

But Epoch Media was able to attract Chinese with the appeal of a free press and has given new immigrants a chance to gain a new perspective.

“It’s quite important for the Chinese people, especially the new immigrants to really understand and be part of this community so that they can live free from the communist censorship and influence,” said Tsai.

It’s hard to imagine for New Yorkers who may take their freedom for granted, but Chinese still grow up in a one party-one voice system where every piece of information, from school text books to evening news, keeps the Party line.

“It means a lot for the Chinese community to see that free and independent media can celebrate the Chinese New Year,” Tsai said.

In China, individuals have to obtain anti-censorship software and overcome the internet blockade to read the Epoch Times. “Here, anybody can grab a copy,” Tsai said.

But it also works the other way.

Increasingly, China news has become a necessity of American businessmen, political leaders, and even the general public (who consume a significant share of China’s production). “If China sneezes, the world catches a cold,” as Tsai put it.

The English-language edition of Epoch Times, drawing upon on Dajiyuan’s insight and its sources inside China, maintains reporting on China as a core strength.

The paper is regularly able to disentangle issues in the opaque social, political, and business landscape of China, the fall of the internet giant Alibaba being the most recent example.

It is only fitting for the group to be true to its roots and march, despite the freezing temperatures, in the New York Chinese New Year Parade.

The Epoch Media Group consists of the Epoch Times newspaper and its multiple language editions, as well as New Tang Dynasty TV.