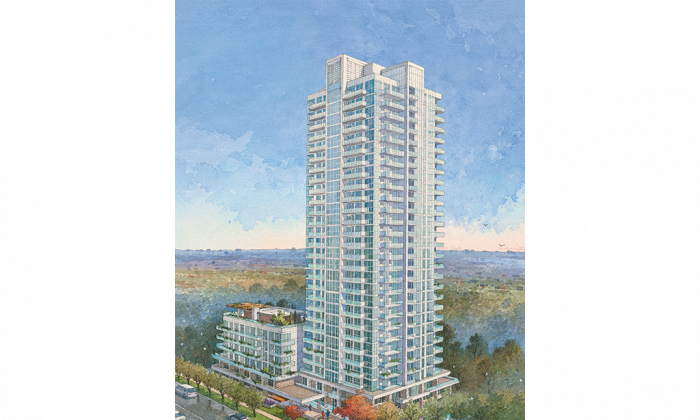 International Home Marketing Group has launched sales for the first phase at The Ravine, a master-planned community in North York that’s nestled amid acres of parkland. The first phase will be a 29-storey glass tower with 331 suites. (Courtesy of IHMG)
Canadian Content

'We have to reset our expectations,' company president says
By Ryan Starr
biggersmaller
Print

Asked for his thoughts on the state of the spring real estate market, Elliott Taube doesn’t sugarcoat the situation.

“This year has been very rough in the sense of new (product) releases,” the president of International Home Marketing Group tells Epoch Times in an interview at the company’s Markham office.

“Normally spring is crazy with releases and launches. But this year you can count on two hands how many projects there are out there.”

That’s not to suggest Taube and his team haven’t had a good start to the season. One of the projects they launched, Design Haus, a 116-unit building on College Street by Shiu Pong Developments, sold out almost instantly. And other high-profile developments out there—such as TeaHouse at 501 Yonge St. and Art Shoppe Lofts + Condos on Yonge just south of Eglinton Ave. —also have had tremendous sales success in the first half of 2015, he points out.

“But everybody else has not opened up the door and sold 30, 40, 50 percent of their inventory right off the bat. It’s just not as buoyant as it was last year, and we’re all kind of seeing it.”

Things are so iffy out there that IHMG is actually postponing the launch of some of its clients’ projects until fall. “We’re waiting to see what the market is like at that time,” he says.

IHMG is coming off of one of its best years on record, having exceeded its 2013 sales by 40 percent, according to Taube. And the firm expects to bring about 1,500 units to market this year on behalf of its various developer clients.

“There’s definitely still an appetite, people haven’t gone away,” he says, noting that product that’s priced right and in quality locations will still find buyers. “I just think we’re getting into a more normal market, and we have to reset our expectations. (The GTA is) probably not going to be doing 30,000 sales a year.”

Earlier this year IHMG launched the second phase of Liberty Central, a 302-unit, 27-storey tower in Liberty Village by Canalfa Group. IHMG has long-standing ties to Liberty Village; the company’s co-founder Michael Wilson, who passed away last year, helped CanAlfa president Walter Jensen pioneer the area for residential redevelopment following the demise of its manufacturing base. “They were really the architects of the whole thing,” says Taube.

Today Liberty Village is a bustling mixed-use neighbourhood that boasts an “incredibly robust rental market,” he points out, for condo investors who may want to take note. “They’re basically getting downtown core rents even though they’re not in the core.”

In North York, IHMG has launched sales for the first phase at The Ravine, a master-planned community by Urban Capital Property Group and ALIT Developments on York Mills Rd. just east of the Don Valley Parkway that’s nestled amid acres of parkland. The first phase will be a 29-storey glass tower with 331 suites.

The community’s bucolic backdrop is a big selling point. “The ravines behind it are spectacular,” Taube says. Almost as alluring is the project’s proximity to major highways. “To be south of the 401, if you’ve got to get onto the DVP, is a great thing.”

Elsewhere, IHMG is continuing sales at Zigg Condos, an 11-storey, 166-unit project by Madison Homes and Fieldgate Homes on St. Clair Ave. just west of Avenue Rd. While Taube notes “we’re at the point now where the next 20 to 30 deals will give us what we need for construction financing” on the building, it’s been a challenge selling investors on the area, surprisingly.

“They don’t understand the dynamics of Forest Hill, and the $5- to $10-million housing there, or the fact you’re equidistant to the Yonge and University subway lines,” he explains. “So we’ve had to educate some investors.”

On the low-rise housing side, any project IHMG brings to market creates a mini-frenzy, owing to the severe lack of ground-related inventory out there. In June it will launch Briar Hill Towns, a community of 130 stacked townhouses at Dufferin St. and Briar Hill Ave. The stacked townhome is much in demand these days, says Taube—a happy medium for buyers who can’t afford a detached house but don’t want to live in a condo building.

IHMG is also in Ottawa this spring, selling SoHo Italia, a luxury condo project by Mastercraft Group—developers of Toronto’s SoHo Metropolitan Hotel and The Hazelton Hotel—that’s being targeted at Toronto investors. “We’re going to be doing a rental program, so somebody who buys it here can have a hands-off investment opportunity.”

IHMG’s extensive network of global investors might also be interested. After all, with a weaker loonie, says Taube, “they’re buying at a 20 percent discount.”