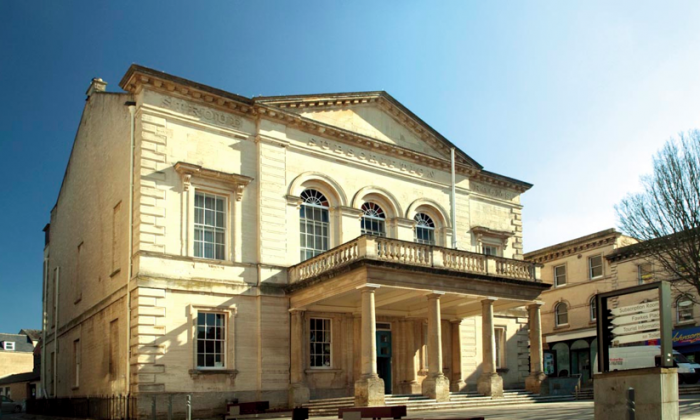 Stroud in the Cotswolds welcomed The Art of Zhen Shan Ren (Truth Compassion Tolerance) International Exhibition on August 16th in the Subscription Rooms.

Zhen Shan Ren – the Chinese words for Truth Compassion Tolerance – are the universal principles of Falun Gong, a qigong practice that is persecuted in China. It is the biggest global spiritual practice with over one hundred million adherents in China alone.

All the artists practise Falun Gong and all but one of the eighteen are Chinese.

Producing work in a style they call Neo-Renaissance, they pick up the spiritual baton of the fifteenth century Renaissance as well as its artistry and skill.

Jay Ramsey, a poet, healer, and psychotherapist who lives and works in Stroud and London, said the beginning of the Exhibition has a sense of illumination and expansion.

“And then you have this horrible depiction of interference,” he said.

The exhibition has seven distinct sections depicting aspects of Falun Gong belief, practice, and its persecution. The end sections feature the redemptive nature of its inner cultivation and cosmology.

“It’s interesting how the style of the paintings changes from classical iconic style of the early pictures and then suddenly you come into a realm of horrific … photo-realism. Some of them are almost surreal,” Mr Ramsay said.

“I feel it’s a very important show because as well as illustrating a major human rights abuse, it seems to me it’s really a global issue around the suppression of people’s spirituality and connection to something higher than themselves, higher than ego-centred power.

“I found it a very powerful exhibition on all those levels and it seems to me a very, very important issue,” he said.

Others also found the paintings very powerful. After going round the exhibition, many were in tears and had to be comforted by invigilators.

The number of visitors has averaged one hundred and fifty each day.