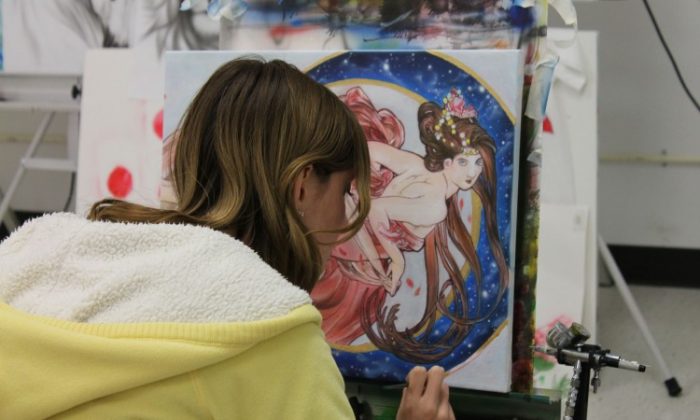 A student works on a design at the airbrush school in Pontiac, Ill. (Courtesy of Tang Dongbai)
US

Pontiac, Ill. may now qualify as the airbrush artist capital of the world, that is, if Mayor Bob Russell and internationally-known artist Tang Dongbai have any say in the matter.

Home to several cultural oddities, this town of 12,000 has more museums per person than any town can boast, among them a war museum, and an auto museum.

Perhaps most famous is its Route 66 Association Hall of Fame & Museum. Tourists from around the world visit as part of their pilgrimage across the country. On Saturday, Nov. 17, the city had its 150th group come through, according to Pontiac’s mayor, Bob Russell.

The town also sports the International Walldog Mural & Sign Art Museum. Walldogs are those painters who in the old days created outdoor murals and advertising signs.

Pontiac’s Walldog museum opened in 2010, after a June 2009 encounter when 150 Walldog artists descended on the town.

The aim of the Walldogs, in addition to having annual reunions, is to spruce up a town with mural paintings. Any useable outdoor surfaces like sidewalks, sides of barns, or buildings are fair game. Often the images depict local history.

Once the walldogs beautify one spot, they then move on to another. In Pontiac, though, mural art found a home.

Internationally recognized airbrush artist Tang Dongbai, originally from Beijing, read about the Walldog extravaganza while in Chicago, and decided pay Poniac a visit.

The award-winning artist has been creating custom airbrush-painted masterpieces on vehicles, clothing, and large useable spaces for the past 10 years. He also founded the Dongbai International Airbrush Art School in Beijing, which is considered the most authoritative airbrush art school in China, according to Dongbai’s website.

A graduate from the Lu Xun Academy of Fine Arts in Shengyang, China, Dongbai creates paintings on dresses that can only be viewed under UV light. He published the first books on automobile painting technique in China. “In addition, he also created the first DVD airbrush painting courses,” according to his website.

In Pontiac, he painted 17 murals and found the small town so inviting, he decided to start a new school there.

“When I first heard that Dongbai was coming to our City, I didn’t know quite what to think,” Mayor Russell wrote in an email. “When I actually saw his work, I could not believe what I was seeing. He has an artistic talent that I doubt can be matched by anyone else.”

Opening this past April, the school is located in a large office building. It houses a studio area with eight airbrush stations and a room for vehicles. The entrance has a gallery to showcase the created work.

Dongbai teaches small classes in airbrush technique to 12 students at a time, from beginners to advanced students. The intensive classes range from 5 days to 4 weeks long. Typically his students come from China although he teaches American students as well.

Students learn to create cartoons, landscapes, animals, people—basically anything. They learn to airbrush on large surfaces, cars, and clothing. They can even learn the airbrush techniques for UV painting.

Whether Dongbai and his school make Pontiac a Mecca for airbrush art is yet to be seen. In the meantime, “He and his family have become a big part of our community and we are very privileged to have him here,” Mayor Russell said.