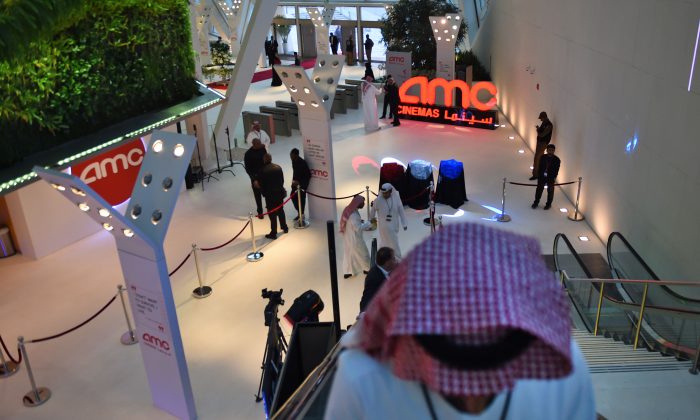 Saudi men take the escalator during a cinema test screening in Riyadh on April 18, 2018. The terrorist group ISIS has discussed on private communications about threatening the theater. (Fayez Nureldine/AFP/Getty Images)
International

An anonymous user on an internal ISIS chat network, translated from Arabic, stated on April 22 that for Muslims near the cinema in the Arabian Peninsula, it “is necessary to issue a threat to blow it up because of proximity to it and Muslims are quick to remind you.”

The communications were intercepted by the scanning tool MORSE used by private darknet intelligence company BOC Intel, which currently logs in real-time the communications of 200 terrorist groups on WhatsApp and gives alerts when chats begin to surge—something that often takes place ahead of terror attacks or during new terror campaigns.

A translator with BOC Intel notes there were other mentions of the movie theater in Saudi Arabia, which appears to be “something that got one of them upset.”

A spokesperson with BOC Intel said in an email that “MORSE alerted us yesterday to an increase of Twitter links than normal in terrorist group channels on WhatsApp.”

He said the terrorists have launched a new strategy on Twitter, in which they use random accounts to post terrorist propaganda as comments on the posts of other users, rather than posting the propaganda as standalone posts.

Among the individuals on the internal terrorist chat networks is one who calls himself Abu Walid al-Shami and uses a Swedish phone number. The user writes in run-on sentences, and praises the terrorist social media campaigns, stating that posting the entries on Facebook and Twitter “terrifies them” and that the platforms “try by any means to stop you and spend great money to repel you.”

The terrorist adds, “You have them, O Messenger of Allah, invaded and stormed the means of social communication. … The more you enter and the more your number has been useful in reducing the deletion.”

The BOC Intel spokesperson noted that a large number of the accounts use Swedish phone numbers, although the spokesperson could not confirm whether they were temporary “burner” phones.

The terrorist group member, Abu Walid al-Shami, states in the internal chats that “our loved ones are # media accounts and some fools,” and then lists Twitter comments from other members, which he tells the chat group to reply to, to copy, and to repost directly on their own channels.

Another member of the group, called “Fathers,” who was using a New Jersey phone number, sent a message stating, “Dear brothers in the Brigades of the invasion and publishing in Twitter within the confidentiality of the certificate to enter the battalions of the invasion … tighten the bond and raise the burden and the support of your religion.”

The post gives links to different users and tools, which includes a bot network users can access. The user, Fathers, describes it as a tool “to invade Twitter in the following battalions.”

Other users post propaganda images for other members to spread. One user calling himself “ABD Faqeer” published a propaganda image titled “For the sake of Allah we will march through the gates of the paradise.”

Another user, Carol Sanders, posted a propaganda image titled “You brought death to yourselves.”

The other propaganda images are of a similar nature. Other tweets are propaganda on terrorist killings—mainly in Iraq, Egypt, and other countries in the region—meant to inspire potential terrorists.

The BOC Intel spokesperson noted, “What is particularly interesting is that Mark Zuckerberg, Facebook CEO, sat in front of Congress recently and told the world they are doing all they can to protect users data and remove hate/extremist content from their platform.”

“Well, obviously they are not doing enough, as the extremist groups on WhatsApp exceed 200,” the spokesperson said, noting that WhatsApp is owned by Facebook. “WhatsApp is a well-known platform for human trafficking, drug transactions, fraud, child exploit, as well as terrorists.”