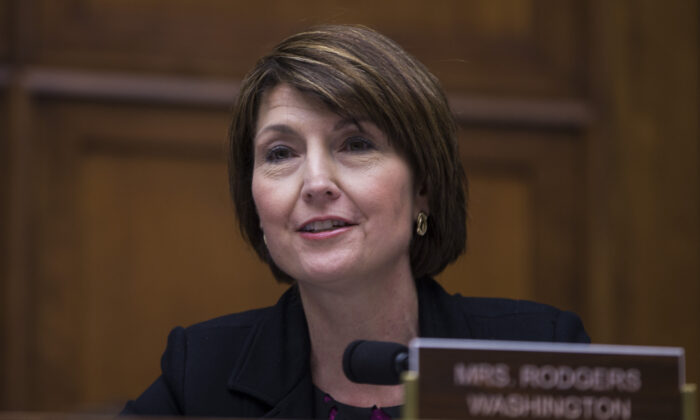 Among the documents, obtained by The Intercept through the Freedom of Information Act, was a previously unpublished grant proposal titled “Understanding the Risk of Bat Coronavirus Emergence,” outlined by Peter Daszak, president of U.S.-based health organization EcoHealth Alliance.

The National Institute of Health (NIH) awarded the grant—totaling $3.1 million for five years from 2014 to 2019—to EcoHealth.

A portion of the grant money, $599,000, was directed to the Wuhan Institute of Virology (WIV) for research, including altering bat coronaviruses that were deemed likely to infect humans.

The disclosure seems to contradict claims by Fauci, head of the National Institute of Allergy and Infectious Diseases (NIAID), and NIH Director Dr. Francis Collins, who both have said that the grants didn’t back gain-of-function research.

“These NIH grant documents further indicate that Dr. Fauci and Dr. Collins have broken trust with the American people,” Rodgers and Reps. Brett Guthrie (R-Ky.) and Morgan Griffith (R-Va.) said in a statement released on Sept. 7.

“For months, Dr. Fauci dismissed any consideration of the lab leak theory despite, or perhaps because of, his agency’s involvement in risky coronavirus research at the Wuhan lab. Dr. Collins has repeatedly denied what these documents now show.”

The WIV, home to one of China’s highest-level biosafety P4 laboratories, has been under scrutiny as the source of the virus. It’s located only miles away from the seafood market where the first clusters of patients infected by COVID-19, a disease caused by the CCP (Chinese Communist Party) virus, are said to have emerged.

Beijing has denied any suggestion of a link between the virus origin and a lab leak at the WIV. Instead, it has thrown its weight behind a natural zoonotic hypothesis—that the virus was transmitted to humans from an animal host.

A State Department fact sheet released in January said it had reason to believe that “several researchers inside the WIV became sick in autumn 2019, before the first identified case of the outbreak, with symptoms consistent with both COVID-19 and common seasonal illnesses.”

A U.S. intelligence report, which was released on Aug. 27, stated that it couldn’t come to a conclusive assessment about the pandemic’s origins, given China’s refusal to cooperate.

“If NIH, NIAID, and EcoHealth Alliance had been transparent about research being conducted at the Wuhan lab from the beginning, perhaps it would have aided in our response to the global pandemic,” the three lawmakers stated.

“The American people deserve answers,” they wrote. “These documents raise more questions about what kind of risky research Dr. Fauci and Dr. Collins have been funding and what other information they refuse to give us.

“We will continue our pursuit of the truth and will not stop until we get answers the American people deserve.”

Evidence suggests that Daszak has ties to the Chinese regime. At a 2018 conference sponsored by Chinese state broadcaster CGTN, he revealed that EcoHealth had received funding from Beijing. CGTN is the international arm of China’s state broadcaster CCTV.

Daszak and the NIAID did not respond to requests for comment.

The NIH in response to the documents told The Epoch Times by email, “NIH has never approved any research that would make a coronavirus more dangerous to humans. The research we supported in China, where coronaviruses are prevalent, sought to understand the behavior of coronaviruses circulating in bats that have the potential to cause widespread disease.”

It added: “The body of science produced by this research demonstrates that the bat coronavirus sequences published from that work NIH supported were not SARS-CoV-2.”

This article has been updated with a comment from the NIH.