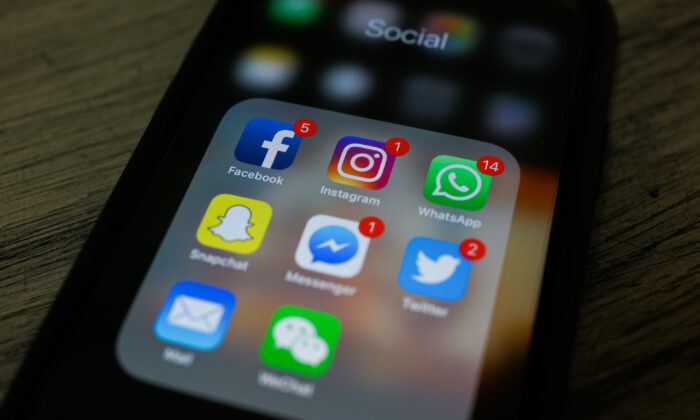 Social media apps on a smartphone in this file photo. (Chandan Khanna/AFP via Getty Images)
Analysis

Thanks to Missouri Attorney General Eric Schmitt and Louisiana Attorney General Jeff Landry, we know that a large number of agencies within the Biden administration actively coordinated with a variety of social media platforms to censor and suppress posts about COVID-19 that they deemed to be misinformation.

Schmitt has “received a number of documents that clearly prove that the federal government has an incestuous relationship with social media companies and clearly coordinate to censor freedom of speech.” In a new filing, Schmitt called the censorship activities “a massive, sprawling federal ‘Censorship Enterprise,’ which includes dozens of federal officials across at least eleven federal agencies.”

Included in this Censorship Enterprise are officials in the White House, Health and Human Services, Homeland Security, the Cybersecurity and Infrastructure Security Agency (CISA), the Centers for Disease Control and Prevention (CDC), Dr. Anthony Fauci’s National Institute of Allergy and Infectious Diseases (NIAID), and the Office of the Surgeon General.

Schmitt has noted that other agencies appear to be involved as well, including the Census Bureau, the Food and Drug Administration, the FBI, the State Department, the Treasury Department, and the U.S. Election Assistance Commission—a division within CISA. This Censorship Enterprise rises to the highest levels of the U.S. government.

We already know that Facebook CEO Mark Zuckerberg casually acknowledged that Facebook had been directed by the FBI to treat the Hunter Biden laptop story as Russian disinformation, despite the FBI having held the laptop for almost 11 months knowing full well the device was real.

The timing for Zuckerberg’s admission on Joe Rogan’s podcast has now become clear as shortly afterward new emails were released by Schmitt and Landry showing that Facebook was coordinating with members of the Biden administration during an ongoing sequence of weekly and monthly calls to discuss what should be actively censored on Facebook’s platform.

We also know that just as Fauci was orchestrating his campaign to falsely discredit the Chinese lab leak COVID-19 origin theory, Fauci was exchanging emails with Zuckerberg regarding the control and dissemination of COVID-19 information. After the emails between the two men, Facebook began to censor posts that claimed that COVID-19 came from a lab.

One notable email sent from Facebook to an unknown recipient at the State Department in February 2020 stated, “At Mark Zuckerberg’s request, there is a group that has been organized to help generate and implement a new ideas ‘offense’ approach on how Facebook can assist in the global response to the Coronavirus.” The email claimed that Facebook had already taken proactive as well as reactive steps to control information and misinformation related to COVID-19. The email noted that they also included links to the World Health Organization’s page as well as the actual removal of what they deemed to be misinformation.

These actions were widespread. The CDC went so far as to schedule what they termed “lookout calls” with an undisclosed variety of social media platforms. A senior Facebook official sent an email to the surgeon general stating, “I know our teams met today to better understand the scope of what the White House expects from us on misinformation going forward.”

The surgeon general responded, saying, “I’d be happy to speak directly about how we move forward. Let me know the best way to schedule some time later this week.” Twitter formally scheduled a meeting to debrief top White House officials on “vaccine misinformation” and discussed ways the White House could partner with Twitter. And Clarke Humphrey, the digital director of the White House COVID response team, even expressed concern about Fauci parody accounts and coordinated with Facebook to take them down.

Schmitt and Landry also provided a much longer, 711-page filing that includes further examples of the ongoing coordination between the Biden administration’s Censorship Enterprise and a variety of Big Tech firms and corporate media.

One of the more alarming emails is from a CDC official describing the partnership between Twitter and the CDC, whereby CDC officials were connected to Twitter so that they could directly flag content they wanted Twitter to censor. In one email response to the CDC, Twitter welcomed them to their Partner Support Portal, noting that “it worked very well for our Census Colleagues last year.”

A message from what appears to be a government official states that they were “just trying to get us in a place where the Federal government can work with platforms to better understand the misinformation and disinformation trends so the relevant agencies can pre-bunk or debunk.” The unknown company executive responded, saying, “Platforms have got to get more comfortable with government.”

There’s also a series of emails from CISA, which famously issued the Nov. 12, 2020, statement claiming, “The November 3rd election was the most secure in American history.” In the email chain, CISA asked for the removal of three parody accounts that were obviously making fun of the state of Colorado’s Twitter account and were clearly parody accounts.

In the legal subheading attached to the email, CISA states that it makes no recommendation about how the information it is sharing should be handled by social media companies. But the short email from CISA says differently, with the sender stating, “I’ve asked them if these accounts have already been reported.” Twitter responded to CISA saying “we will escalate.”

These messages and emails demonstrating direct and active coordination between a wide swath of federal agencies and Big Tech companies continue for hundreds of pages, demonstrating how the line between government and Big Tech has become increasingly blurred.

An earlier lawsuit from the two attorneys general provided multiple examples of threats from the White House—implicit or otherwise—made against tech companies if they didn’t follow the demands of the Biden administration.

These emails demonstrate that large tech companies have aligned themselves with those in power—both from the Democrat Party and the D.C. bureaucracy—in a coordinated effort to silence conservatives and control the flow of information.

They also show the vast extent of this cooperation and the very real control of information by the Biden administration. Government-sponsored censorship isn’t only illegal but also extremely dangerous, precisely because there is no one to police the censors. The First Amendment is perhaps the most cherished of all our rights. We need to defend it as such.

Watch the full episode of Truth Over News on these latest revelations on Thursday, Sept. 8.