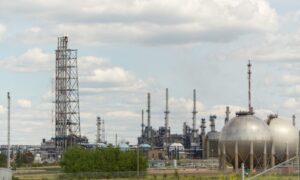 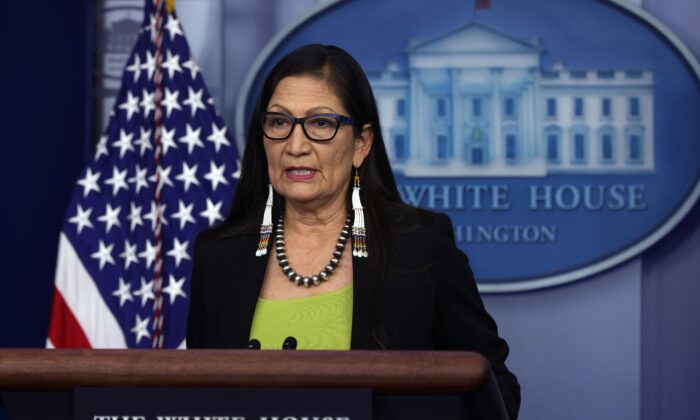 Secretary of the Interior Deb Haaland speaks during a daily press briefing at the James Brady Press Briefing Room of the White House in Washington, on April 23, 2021. (Alex Wong/Getty Images)
Executive Branch

WASHINGTON—U.S. Interior Secretary Deb Haaland said at a House committee hearing on June 23 that the Biden administration has no plan to permanently ban new oil and gas drilling on federal land.

“Gas and oil production will continue well into the future,” Haaland said during a House Natural Resources Committee hearing. “I don’t think there is a plan right now for a permanent ban.”

During the hearing, Haaland said that the review would be released “early summer.”

“We will assess the fossil fuel programs at that time,” she said.

“I guess it’s good. It implies she just may not know what they’re doing yet and even if she did know, that plan could change in the near future,” she told The Epoch Times in an email.

“I guess we’ll find out soon what the plan is. I suspect the review will take at least a few years leaving plenty of time left to wonder if the ultimate outcome will be another unlawful attempt to stop leasing,” she said.

Sgamma added that Haaland’s statement at the hearing recognizes “that neither she nor the president have the authority to simply ban leasing.”

U.S. crude inventories dropped 7.6 million barrels for the week ended June 18, according to a report from the Energy Information Administration on Jun 23. That marked the fifth consecutive decline reported by the agency.

Critics argue that the administration’s climate agenda is making it hard for domestic producers to invest to meet the country’s growing energy demand; hence, they are concerned that the United States would end up being more dependent on oil imports from overseas.

Environmental groups, on the other hand, demand Biden fight harder for the climate agenda.

“It now seems that Biden has no intention of keeping that promise,” Mitch Jones, policy director at the advocacy group, said in a statement.

“This would be a disastrous capitulation to the fossil fuel industry, and a worrying sign that this White House is not committed to the kinds of actions necessary to stave off climate catastrophe,” he said.