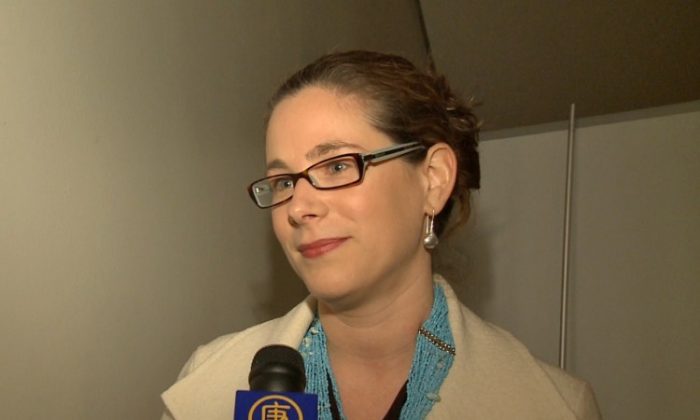 “Its awe-inspiring and educational all at the same time. It’s really wonderful,” she said.

“I love it, it was nothing that I had anticipated.”

Ms. Younker has worked as an interior designer for 12 years across a wide variety of industries—from residential and commercial projects to hospitality, industrial, and health care.

She said the vibrant and unique colour palette in Shen Yun’s costumes was remarkable and inspiring.

“It evokes feeling and sensation and really engages the audience in what’s going on onstage—its beautiful.”

According to its website, the company creates hundreds of new costumes each season and aims to achieve “an authentic presentation of the attire that comes from China’s divinely inspired traditional culture.”

“Shen Yun’s costume artists collect countless designs of traditional attire, ranging from those of emperors, ministers, and generals to the everyday clothing of the common people,” reads the website.

“Every detail is given meticulous attention and is a result of artistic inspiration and careful polishing. The designers stress harmonic balance and contrast.”

Ms. Younker said the colour combinations in the costumes were exciting, noting that she hoped to incorporate them into future projects.

“I’m in love with the turquoise, the browns, and all the golds and greens—it’s really pretty,” she said.

“I’m thinking of new colour combinations already to incorporate into my home.”

It was the first time for Ms. Younker to experience classical Chinese dance and she said the performance was “a lot of fun to watch.”

“I’ve never seen it before and it’s very interesting, I love the intricacy and the elegance of it all—fantastic,” she said.