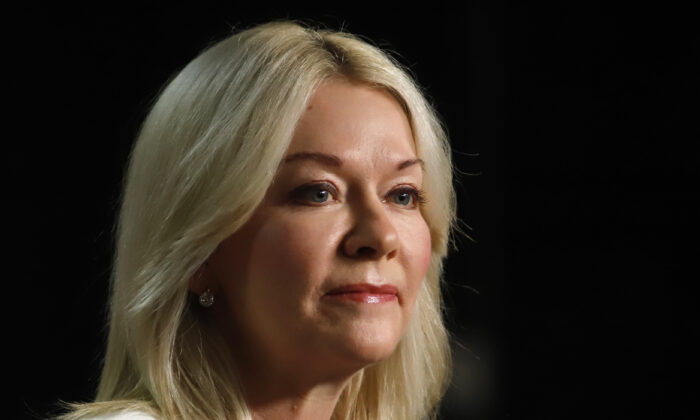 Conservative Party interim leader Candice Bergen said on Sept. 6 she won’t defend her seat in the next federal election, a few days before her party is set to choose its new leader.

In a statement announcing the decision, Bergen did not explicitly state her reason for declining to run in the next general election, which may not be held until 2025.

“After 14 remarkable years and 5 elections, I am looking forward to opening new doors and embracing new opportunities and pursuits in the next chapter of life,” Bergen wrote.

Bergen said in her statement she is “committed in the immediate future” to serve her Manitoba riding of Portage-Lisgar.

Bergen reportedly told the Toronto Sun she will remain an MP for now, but timing would decide whether she stays in the House of Commons until the next election.

Bergen thanked former Prime Minister Stephen Harper and former interim Tory leader Rona Ambrose for previously entrusting her with government roles, saying she is “humbled and grateful for every leader I have worked with and learned so much from.”

Bergen’s announcement comes a few days before the party selects a new leader, scheduled on Sept. 10.

“I will wholeheartedly be supporting whoever takes my place as Leader,” Bergen said.

Bergen took over as interim leader of the party after Erin O’Toole was ousted on Feb. 2, after losing a leadership review from sitting Conservative MPs.

Rob Batherson, president of the party’s National Council, thanked Bergen for her leadership and offered his “best wishes for the remainder of your time in public life & after.”

“I have had the honour to serve alongside you,” he wrote.

Tory MP and public safety critic Raquel Dancho said the “country and our party has benefitted immensely from your contributions and leadership.”

“I’d like to personally thank her for her commitment and her career fighting for a freer and stronger Canada,” said MP Pierre Poilievre.

Former Quebec premier Jean Charest thanked Bergen for her service and for “taking the lead in holding the government to account” during the race.

MP Leslyn Lewis  said she will “forever be grateful for Candice Bergen‘s service and even more so her example of leading with unity, impartiality and grace.”

MP Scott Aitchison thanked Bergen for her dedication to the conservative movement and her “tireless work to grow our party.”