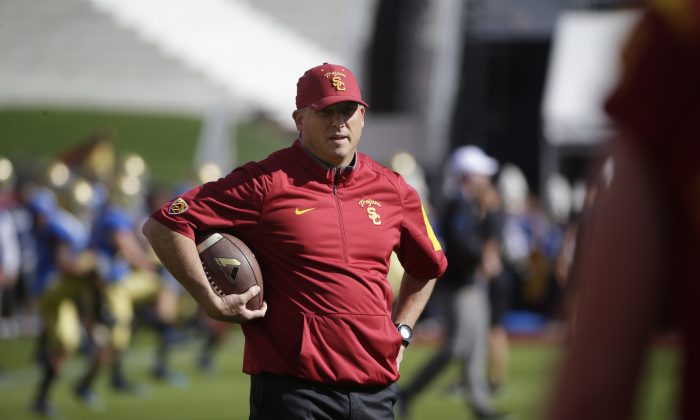 LOS ANGELES—Clay Helton appears wholly uninterested in spending even one minute of the next week publicly politicking for the full-time head coaching position at Southern California.

Helton’s job still might turn out to be temporary, but it also isn’t finished.

“That is not my job,” Helton said on Nov. 28 when asked if he deserved to keep the post he has held on an interim basis for seven weeks. “I let the guys whose job it is to speculate, speculate.”

Helton’s players were less shy after the 24th-ranked Trojans (8–4, 5–3 Pac-12) beat archrival UCLA 40–21 to win the Pac-12 South title, capping a resurgent regular season with their first victory in the crosstown showdown since 2011.

USC advanced to the conference championship game against No. 7 Stanford and the chance to contend for a Rose Bowl berth—something that seemed highly improbable last month when athletic director Pat Haden fired Steve Sarkisian and promoted Helton to finish up a season for the second time in three years.

“Coach Helton 2016. Hashtag it,” defensive lineman Claude Pelon said. “He’s a players’ coach. He loves us. We love him back.”

USC finished the regular season 5–2 under Helton, winning five of its last six and roaring back to win the division. Counting the Trojans’ Las Vegas Bowl win under Helton two years ago, the interim coach is 6–2 at USC, with his only losses on the road to Notre Dame and Oregon.

“It has been since 2008 that a USC football player was able to call themselves a champion,” Helton said. “For this team to leave their mark, not only now but for years to come, I can’t tell you how proud I am of them.”

The Trojans have performed impressively for Helton, but it’s still unclear whether it’s impressive enough for the decision makers at USC with their sky-high expectations of annual contention for national championships.

Fans and alumni still fill up message boards and radio shows with talk of bigger-name coaches from Chip Kelly and John Harbaugh to Kyle Whittingham and Tom Herman. Helton’s supporters tout his character and stability after the tumultuous tenures of Lane Kiffin and Sarkisian—and they point to the example of unheralded Dabo Swinney, who shed his interim tag at Clemson in 2008 and eventually built the nation’s No. 1 team.

“He’s got this team back together,” USC linebacker Su’a Cravens said. “He knows what it’s like. He knows the culture of the team. He knows every single one of these players personally and allows us to talk to him, and we feel comfortable talking to him. We love him and we want him back.”

Cravens is likely to be a high NFL draft pick next year, but he even claimed he would consider sticking around for his senior season if Helton is retained.

Helton is a 43-year-old football lifer and former quarterback from a coaching family, so he knows the factors that will go into Haden’s decision. Helton also knows the capricious nature of his profession from both sides: He left a job at Arkansas State after just 57 days when a better job opened up at USC.

The Trojans lost to Stanford earlier this season while Sarkisian was still in charge, but much has changed at USC during Helton’s seven weeks in charge. Tailback Justin Davis echoed the public thoughts of nearly every player on the USC roster when he described Helton’s smooth assumption of the top job last month after Sarkisian was fired.

“When the coaching changes were happening, we kind of lost our identity as a team,” Davis said. “(Helton) came in there the next week and said, ‘I don’t know why you guys are tripping. We’ve still got to win the Pac-12 South. We can still do that, and we can still win the championship.’ He made us stay on course, and we knew that the goal ahead of us was still reachable. That made us dig in and get to work.”