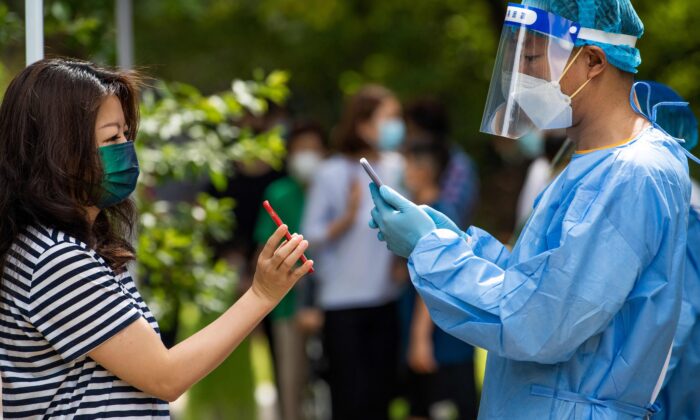 A health worker scans the health code of a local resident for COVID-19 test results in the Pudong district of Shanghai on June 11, 2022. (Liu Jin/AFP via Getty Images)
INSIDE CHINA

As lockdown measures in Shanghai ease, residents are experiencing some unusual situations as the city is not yet back to normal.

In his speech, Li Qiang did not mention the zero-COVID policy, the draconian lockdown, or the mandatory PCR testing of 25 million people. Li attributed the “victory” to “the absolute correctness of the CCP Central’s leadership and the incomparable advantage (over the West) of the socialist system.”

The Chinese Edition of The Epoch Times spoke to several Shanghai residents on June 25 about life after the declared victory over COVID.

A gentleman from Pudong District, last name Wang, told The Epoch Times, “the government says they’ve won the battle, even though they lost, they still say they won. The Party always advances from one victory to the next. When was the last time they admitted their mistakes? Why don’t they talk about the economic losses?”

Wang said that life in Shanghai is far from normal because everywhere one goes, one has to show their digital health code which is linked to the PCR test results, and dining-in is still not allowed in most restaurants.

In fact, people jokingly describe the experience of eating in a restaurant to be “as stimulating and secretive as a thief sneaking into someone’s house.”

In order to keep their businesses going, many restaurants came up with creative ways to allow people to covertly dine in. They cover their windows and shut their doors so the restaurant appears to not be in business or only fulfilling carry-out orders. But inside, people are dining secretly and quietly.

A picture showing a restaurant with all the lights off and privacy glass windows went viral online. A few customers are eating, while a waitress is standing behind a closed door listening, trying to figure out what’s happening outside the restaurant. Looking through the privacy glass, one can see two people dressed in neon yellow security vests outside. Some customers are looking at the window.

One netizen described what happened when he went to a hotpot restaurant. The door was closed. So he asked a person who was standing outside the door, “can I dine in?” The person said, “only close friends are allowed in.” The netizen asked, “how can I be your close friend?” The man said, “we just spoke, aren’t we close friends already?”

Wang also said that government wants to revive the economy, but people aren’t buying anything other than necessities. “Since the prices have risen over 50 percent, many households are struggling,” Wang said.

Another Shanghai resident Mr. Gu said, “They say there is no COVID anymore, but why are there still many communities locked down? No other country would say they won the battle against a virus. Only the CCP, everything they do is great, glorious, and correct. They can turn disasters into opportunities for self-praising.”

“Many people died but not because of COVID. Some could not get timely medical care. Some committed suicide because they lost their jobs and could not pay their mortgage. But many CCP officials became rich because of COVID. Now police are everywhere. This isn’t a normal country, but a big police state,” Gu told The Epoch Times on June 25.

From April 1 to June 1, life under lockdown has been the touchstone of some marriages. Thepaper.com reported earlier this month that “appointments for divorce” was trending on Wechat, a Chinese Twitter-like social media platform. Another media report said that the line to register for divorce after the lockdown is similar to that for PCR testing during the lockdown.

A blogger named Luofeng Huashi posted three reasons for divorces after the lockdown. First, the couple had decided to divorce prior to the lockdown. Second, by spending so much time together, they can’t stand each other any longer. The third reason is that by spending so much time together, one party accidentally discovered the other party’s affair.