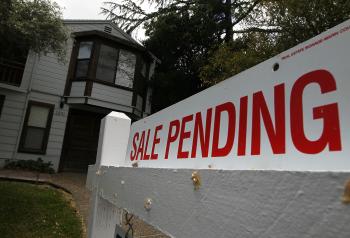 A 'sale pending' sign is displayed in front of a home for sale May 24, 2010 in San Rafael, California. (Justin Sullivan/Getty Images)
Business & Economy

The average mortgage rate for 30-year home loans hit its highest level since April 2010, jumping to 5.23 percent, according to the Bankrate survey. Last week, 30-year mortgages only averaged a 5.02 percent rate.

The Bankrate.com mortgage rate survey differs from the Primary Mortgage Market Survey from government-backed mortgager Freddie Mac, which pegged rates for 30-year and 15-year home loans at a lower 4.81 percent and 4.08 percent on Feb. 3.

Bankrate.com’s survey only includes data from the top 10 banks and housing markets, which explains the disparity between the two reports, but does foreshadow sharply rising interest rates for home loans across the country amid improving economic conditions.

“Just when mortgage rates had lulled everyone to sleep, fluctuating less than one-tenth of a percentage point from mid-December through early February, they broke out—and in a big way,” Bankrate.com said in a press release.

“Mortgage rates jumped to the highest point since April 2010 as better economic news fueled both optimism and a move out of low-yielding assets.”