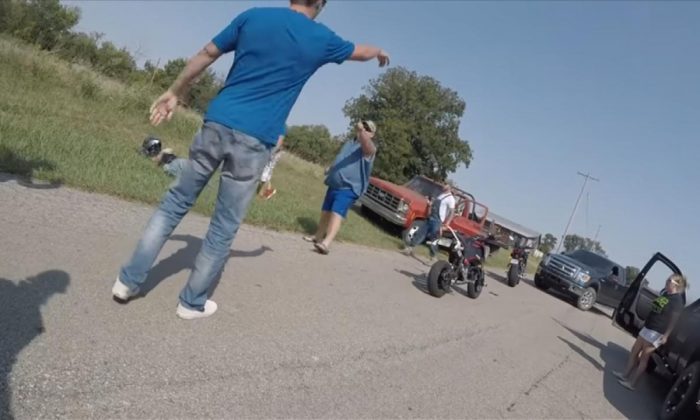 Camden Rader wanted to help his friend but two armed men told him to keep back.

A brawny middle-aged man pinned his friend to the grass on the side of an Oklahoma road and punched him repeatedly.

“Just stop him,” Rader is heard asking in a video of the incident. “Stop him!”

But the man continued, picking Rader’s friend up and barreling a knee into his head. As the teenager lay on the grass motionless, the man kicked him several times. Meanwhile, the armed men kept Rader and his friends back.

“I was just backing up and I said, ‘Let us leave! Let us leave! I’ll get to my bike and you’ll never see us again,'” Rader, 21, told NewsOK. “I wanted to help my friend but I couldn’t. I had a knife on me and a loaded shotgun and I just hoped it would be over fast.”

Rader didn’t report the incident to police after it happened on Sunday, Sept. 10, in Pawnee County. Instead, he posted a video of the events on his Facebook page. He took the video down later, but not before his friend reposted it on YouTube. The footage quickly went viral.

On Tuesday, Rader, who is seen wearing a blue shirt and jeans in the video, received a call from police telling him to file a report. Since then, police have arrested two men and said more arrests are possible as the investigation continues.

In the video, Rader’s friend, who did not want his identity to be released, is seen arguing with the driver of a black pickup truck as they drive side by side on a country road.

Rader told NewsOK that a man parked in a red pickup truck down the road fired two shots in the air as they approached, forcing everyone to stop. The driver of the black pickup got out of the truck and argued face to face with Rader’s friend.

The man in the red pickup truck spoke to NewsOn6 and said that he was there to protect his family. He received a call from his brother who told him that a group of bikers was harassing him and telling him to pull over.

“I heard my nieces and nephew and sister-in-law crying, and the sound of my brother’s voice on the phone,” the man said.

The bikers followed his brother’s truck for 14 miles, the man said, adding that his brother’s wife and four children were in the car.

Rader told NewsOK a different story. The driver of the truck had cut the group of bikers off, narrowly missing one biker and nearly running another off the road, Rader said.

When the fight started, a man held a knife to Rader’s throat threatening to cut him, Rader said.

That man is seen waving a knife in the video and was identified as Paul Wiseley, 60. Police arrested Wiseley on suspicion of assault with a deadly weapon and robbery. Wiseley’s bail was set at $100,000, but formal charges have not been filed yet.

In the video, Wiseley walks away from the camera’s view and returns with another camera in his hand. As the bikers ask him to return the camera, he refuses while waving a knife.

Earlier in the video, he threatens to harm the group of bikers repeatedly.

“I’ll kill you punk [expletive]!” he yelled. “I’ll take that gun and I’ll blow your [expletive] head off!”

As one of the bikers tells Wiseley that they’ll get their bikes and leave, Wiseley threatens again, shouting, “I’ll cut your [expletive] throat!”

Pawnee County Sheriff Mike Waters said that people can’t take the law into their own hands. Investigators would not comment on the probe as it is ongoing.

The brother of the truck driver who assaulted Rader’s friend told NewsOK that the sheriff’s office has a video that shows the events from a different angle. The video proves that the bikers harassed his brother, the man said.

The man said he regrets bringing a shotgun to the scene, explaining that he did not mean any harm.

“I was there to protect my family,” he said. “It’s humiliating because people in my community, a lot of people know me and I’m not a bad person.”

In the video, the man is seen taking the shotgun back to his car and walking over to help the motionless biker as he lays on the grass. He told NewsOK that everyone apologized, shook hands, and went on their way after the fight.

The driver of the truck who beat up Rader’s friend has not been identified but is under arrest. In the video, he can be heard telling Rader’s friends that he is a biker himself.

“I’m a biker myself, but if I get cut off, I have kids in the [expletive] car,” he is heard saying. “I got no problem with you, just don’t cut me off when I have [expletive] kids in the car.”

Rader, who said that the bikers in the group were Oklahoma State University students, hopes that people who broke the law on Sunday will receive appropriate punishment.

“I just want people to pay for their actions,” Rader said. “Everyone thinks I’m trying to get some kind of fame or money out of this and … I don’t care. I just want the truth to come out.”