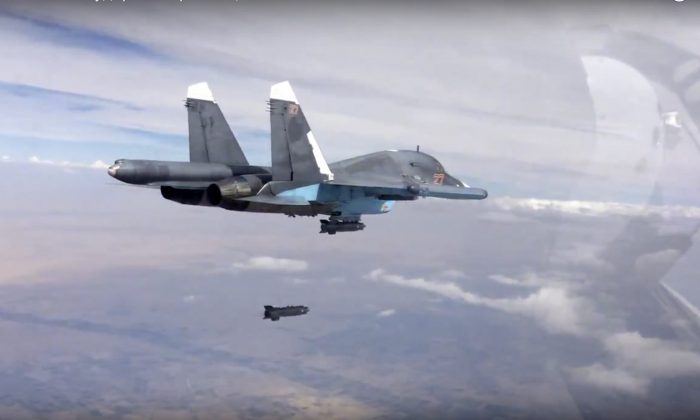 BEIRUT — Syrian troops backed by Russian airstrikes advanced against insurgents in the center of the country as President Vladimir Putin defended Moscow’s intervention in the conflict, saying it would aid efforts to reach a political settlement.

Putin said Moscow’s objective was to stabilize the Syrian government and create conditions for a political compromise.

“When a division of international terrorists stands near the capital, then there is probably little desire for the Syrian government to negotiate, most likely feeling itself under siege in its own capital,” he said in an interview with Russian state television broadcast on Sunday.

Critics of Russia’s intervention have argued that strengthening the government will only make compromise more difficult, and on Sunday the main Western-backed opposition group said the strikes would undermine any efforts to reach a settlement.

The Syrian National Coalition also said it would boycott talks suggested by U.N. envoy Staffan de Mistura, saying any political process must be based on “ending the Russian aggression” and reviving a roadmap adopted in 2012.

The fighting Sunday was on multiple fronts in the northern part of the central Hama province and the nearby rebel-held Idlib province. A Syrian military official said troops seized the northern Hama village of Tak Sukayk. He spoke on condition of anonymity in line with regulations.

It was the second village in the area captured by the government since it launched a wide-ranging ground offensive made possible by Russian airstrikes that began Sept. 30.

In an audio recording, a Saudi militant cleric based in Syria urged fighters to unite, mobilize and attack Syrian forces in different provinces in order to avert “consecutive collapses.”

Abdullah al-Muhaysini, who is linked to al-Qaida’s affiliate in Syria, the Nusra Front, said the Russians aim to distract the insurgents on different fronts ahead of a surprise attack.

“We have to turn that equation around before the infidels seize the initiative,” al-Muhaysini said in the recording, which was first shared by the Britain-based Syrian Observatory for Human Rights.

“If there is no vicious counterattack to penetrate the front defensive lines of the regime, the future will be frightening.”

Shaam News Network, a group of anti-government activists, said several insurgent groups, including the al-Qaida-affiliated Nusra Front, have formed a joint operations room for activities in Hama and Idlib.

The rebels seized almost all of Idlib earlier this year and hold territory in northern Hama and rural Latakia, a coastal province that is a major stronghold for President Bashar Assad and the Alawite religious minority to which he belongs.

Human Rights Watch meanwhile said that an advanced type of Russian cluster munition was used in an airstrike southwest of Aleppo on Oct. 4, as part of what photographs and videos suggest is renewed use of the air-dropped and ground-fired munitions.

The New York-based rights group said it could not determine whether Russian or Syrian forces were responsible for the apparent use of the munitions, which descend by parachute and are designed to destroy armored vehicles but can also pose a major hazard to civilians.

Russia, a key ally of Assad, is a major arms supplier to Syria. Neither country has banned cluster munitions.

There was no immediate comment from Russia’s Defense Ministry.

Russia says its strikes are mainly aimed at the Islamic State group and other “terrorists,” but the ground-and-air offensive is being waged in areas controlled by mainstream rebels as well as the Nusra Front.

U.S. officials say Russia has directed parts of its air campaign against U.S.-funded groups and other moderate opposition groups in a concerted effort to weaken them.

The Observatory, a monitoring group that relies on a network of activists on the ground, said the rebels advanced overnight on a hill overlooking Atshan, a village recently captured by the government. The group said the rebels shelled troops in the newly seized territory.

The state-run SANA news agency said government forces destroyed at least 20 vehicles loaded with ammunition, and some with heavy machine guns, east of Tak Sukayk, killing the “terrorists” on board.

The Russian military said Sunday its jets had carried out 64 sorties in the past day, targeting 63 sites in the Hama, Idlib, Latakia and Raqqa provinces. It said an artillery system and a training base were destroyed in separate strikes in Idlib, and that attacks in the Latakia province destroyed military vehicles equipped with anti-aircraft weapons and mortars.

Putin met with Abu Dhabi’s crown prince and Saudi Arabia’s defense minister in Sochi, where they attended a Formula One race. Riyadh is one of the leading backers of rebels fighting to overthrow Assad.

After the meeting, Saudi Foreign Minister Adel Jubeir, who is also in Sochi, said his country is committed to a political solution that would lead to Assad giving up power. He also reiterated that the 2012 road map should be the guiding principle for any talks.