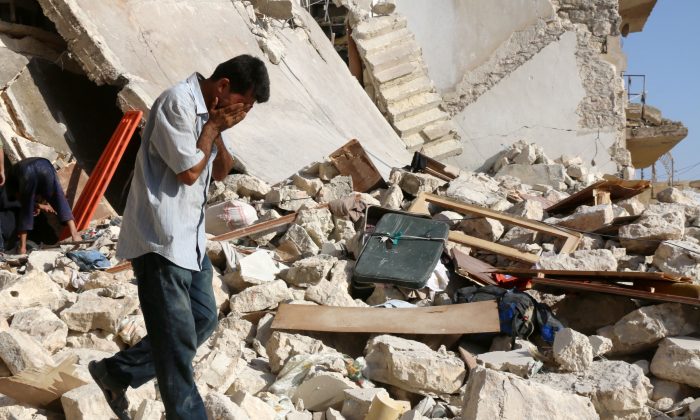 A Syrian man reacts as rescuers look for victims under the rubble of a collapsed building following a reported airstrike on the rebel-held neighborhood of Sakhur in the northern city of Aleppo on July 19, 2016. (Thaer Mohammed/AFP/Getty Images)
Middle East

The International Committee of the Red Cross tweeted after reports of the air raids on the provincial capital of Aleppo and the nearby town of Atareb: “Harrowing news: More hospitals hit in #Aleppo this morning. Civilians and hospitals are” not a target.

Rival sides in Syria’s five-year conflict have targeted hospitals and clinics in the past, mostly in the country’s north.

The Britain-based Syrian Observatory for Human Rights said four clinics are now out of service in the city of Aleppo as well as a fifth in the town of Atareb just west of the city.

Aleppo-based activist Baraa al-Halaby confirmed that five clinics were hit, adding that an infant was killed in a clinic in the Shaar neighborhood in the early hours of Sunday. He added that a blood bank was struck in Aleppo as well.

Syrian government forces and their allies cut the main road into rebel-held parts of the country, known as the Castello road, last week — laying a siege to opposition-held parts of Aleppo. The country’s largest city and former commercial center, Aleppo has been contested since July 2012.

Residents have been reporting shortages of food in rebel-held parts of the city because of the siege.

On Sunday morning, scores of men, women and children, stood in line in front of one of Aleppo’s bakeries to buy bread amid a shortage of fruits and vegetables, al-Halaby said. He added that some bakeries have closed because of a lack of flour or diesel.

The U.N. warned earlier this month that nearly 300,000 people in rebel-held parts of Aleppo rely on the Castello road for travel, food and medicine.

The United Nations says there are nearly half a million people in besieged areas in Syria and an estimated 4.5 million Syrians are in a separate category called “hard to reach.”

SANA also quoted an unnamed Foreign Ministry official as saying that the government is ready for a new round of peace talks “without preconditions.”

The U.N. special envoy to Syria Staffan de Mistura said on Friday that he hopes to be able to hold new talks on Syria’s conflict in Geneva in August as concerns mount over humanitarian access to Aleppo.

Russia and the United States have recently concluded bilateral talks on Syria, and de Mistura said it is important first to see how steps agreed upon there play out.

The Foreign Ministry official also welcomed the Russian-US talks that discussed ways of fighting the Islamic State (ISIS) and al-Qaida’s branch in Syria known as the Nusra Front.