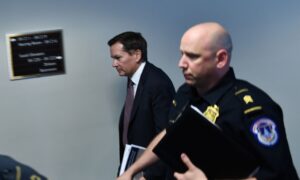 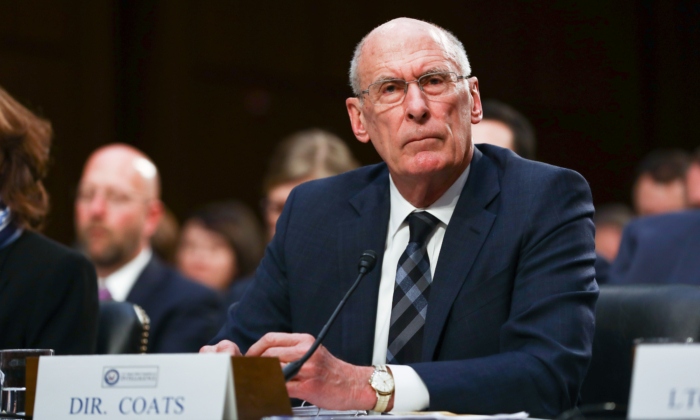 Director of National Intelligence Dan Coats testifies at a hearing in front of the Senate Intelligence Committee in Congress in Washington on Jan. 29, 2019. (Charlotte Cuthbertson/The Epoch Times)
Politics

The Office of the Director of National Intelligence (ODNI) is refusing requests to release an unclassified internal memo linked to the whistleblower complaint at the center of the Democrat-run impeachment inquiry.

The July 23 memo concerns the creation of an election executive and leadership board that then-Director of National Intelligence (DNI) Dan Coats announced on July 19.

The existence of the memo by Coats was revealed in the letter by Intelligence Community Inspector General (ICIG) Michael Atkinson to acting DNI Joseph Maguire. Atkinson’s letter, sent Aug. 26, accompanied the whistleblower’s complaint. The House Intelligence Committee released both documents on Sept. 26.

Atkinson cited the title of Coats memo, “Designation of Intelligence Community Election Threats Executive and Assistant Deputy Director for Mission Integration,” in explaining his rationale for deeming the complaint as credible.

Atkinson cites Coats as saying in the memo, “I can think of no higher priority mission than working to counter adversary efforts to undermine the very core of our democratic process.”

A spokesperson for the ODNI told The Epoch Times that “the internal memo was not crafted or cleared for public dissemination.” A source within the ODNI confirmed to The Epoch Times that the office briefed the White House and Congress about the establishment of the election threats executive (ETE) on July 10.

While the content of the memo remains withheld from the public, the heading references the “designation of the intelligence community election threats executive.”

Coats created the ETE position on July 19 and appointed Shelby Pierson, who led the interagency election security effort during the 2018 midterm election. Prior to working for the ODNI, she worked at the National Geospatial-Intelligence Agency and the CIA.

The ODNI made the announcement about the creation of the ETE position in a five-paragraph news release. The brief notice stated that Pierson “will serve as the DNI’s principal adviser on threats to elections and matters related to election security” and “will coordinate and integrate all election security activities, initiatives, and programs across the IC [intelligence community] and synchronize intelligence efforts in support of the broader U.S. government.”

“Election security is an enduring challenge and a top priority for the IC,” Coats said in the statement. “In order to build on our successful approach to the 2018 elections, the IC must properly align its resources to bring the strongest level of support to this critical issue.”

The FBI appointed a senior official from the Foreign Influence Task Force to the board, according to Carol Cratty, a spokesperson at the FBI’s National Press Office. The National Security Agency also confirmed having appointed the official to the board, but declined to disclose the official’s name.

The Department of Homeland Security (DHS), the Justice Department’s Cybersecurity Unit, and the Pentagon’s Cyber Command didn’t respond to inquiries regarding the ETE.

The title of the Coats memo also mentions the designation of the “Assistant Deputy Director for Mission Integration.” That official is Beth Sanner, the head of the ODNI’s Mission Integration Department. Like Pierson, Sanner also formerly worked for the CIA.

As of December 2018, the ODNI’s Mission Integration Department reportedly employed Paul Wogaman, the son of a prominent preacher to the Clintons who was suspected of leaking from the Intelligence Community Inspector General’s inquiry into the unauthorized email server used by former Secretary of State Hillary Clinton. The ODNI declined to confirm if Wogaman is still an employee.

According to the ODNI website, the election threats executive is a branch of the Mission Integration department.

On July 11, less than three weeks before creating the ETE, Coats delivered classified briefings on the government’s wide-ranging election security efforts to the House and Senate alongside senior officials from the DHS, the FBI, the Justice Department, the Pentagon, and the National Security Agency.

After the July 11 briefings to Congress, the senior officials, including Coats, issued a statement that is nearly identical to the one Coats would issue on July 19 announcing the ETE.

“Election security is a top priority for the United States Government,” the officials stated. “Just like our successful, whole-of-government approach to securing the 2018 elections, we will work together with our Federal, state, local and private sector partners as well as our foreign allies to protect the 2020 elections and maintain transparency with the American public about our efforts.”

On July 25, the Senate Intelligence Committee released a report (pdf) on Russian interference in the 2016 election. The report, which was more than two years in the making, includes an extensive list of recommendations to federal and state governments. None of the unredacted recommendations called for the creation of an entity resembling the ETE. The second volume (pdf) of the report, released by the Senate Intelligence Committee on Oct. 8, also doesn’t include such a recommendation.

On July 28, five days after issuing the unclassified election threats memo, Trump announced that Coats was resigning. In his resignation letter written the same day, Coats cited the creation of the ETE as one of the four major accomplishments of his tenure as DNI.

Coats officially concluded his duties on Aug. 15. The directive on election threats was his last official action recorded on the DNI’s news portal.

Before resigning, Coats made news when CNN reported that he allegedly interrupted an “election security” meeting on Aug. 8 and demanded that Sue Gordon, the second-in-command at the DNI, submit her resignation. Gordon submitted the resignation the same day. In her resignation letter, Gordon wrote that Trump asked “a new leadership team to take the helm.” Trump announced Gordon’s resignation later that day.

The “Election Security” page on the ODNI website says that the agency “is the bridge between foreign collection activities and domestic actions.” Pierson, the election threats executive, “coordinates and integrates all election security activities, initiatives, and programs across the IC and synchronizes intelligence efforts in support of the broader U.S. government.”

The White House didn’t respond to requests for comment.