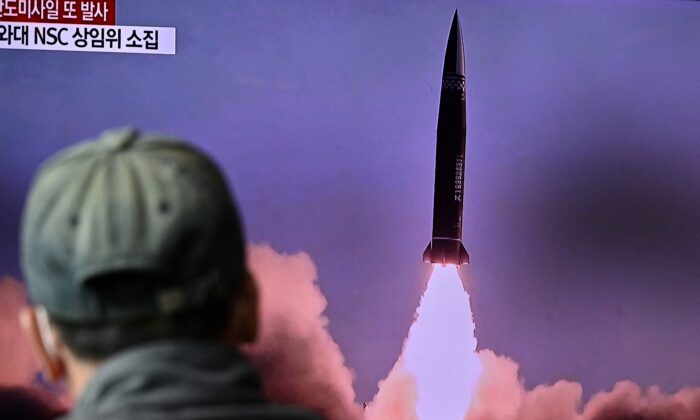 A man watches a television report showing a news broadcast with file footage of a North Korean missile test, at a railway station in Seoul on Oct. 19, 2021. (Anthony Wallace / AFP via Getty Images)
Asia & Pacific

On Oct. 18, intelligence chiefs of South Korea, the United States, and Japan convened in Seoul to discuss North Korean issues, aiming to bring Pyongyang back to the negotiating table through a flurry of diplomacy.

According to the Korea Herald, a trilateral meeting was said to have been held between the head of South Korea’s National Intelligence Service Park Jie-won, the U.S. director of national intelligence Avril Haines, and Japan’s cabinet intelligence director Hiroaki Takizawa on Oct. 18.

It is unclear whether multiple meetings took place, as the report also suggested a meeting on Oct. 19.

According to the Korea Times, U.S. national intelligence director Avril Haines met with South Korean national security director Suh Hoon at the Blue House over lunch on Oct. 18 to “have extensive discussions about the situation on the Korean Peninsula and ways to enhance the Korea-U.S. alliance.”

Following North Korea’s recent series of missile launches, Haines and Hoon shared their assessments of the security situation on the Korean Peninsula, according to the Blue House official.

After conducting four missile tests in less than a month, North Korea is currently seeking dialogue with South Korea while denouncing the U.S. proposal for dialogue.

Pyongyang has remained unresponsive to Washington’s overtures for dialogue. The denuclearization talks remained stalled since the no-deal summit between then U.S. President Donald Trump and the North’s leader Kim Jong-un in 2019.

The meetings between the United States, Japan, and South Korea officials could aim to strengthen the trilateral intelligence sharing between the nations to deter the growing North Korean missile threats.

On Oct. 15, South Korean President Moon and Japanese Prime Minister Kishida held their first phone call and agreed to develop their ties “in a future-oriented manner.”

Prior to the trilateral intelligence meeting, on Oct. 15, President Moon Jae-in held a meeting with the U.S. Central Intelligence Agency (CIA) director William Burns, where he emphasized the Korea-U.S. alliance as a foundation of the nation’s security.

Moon and Burns had in-depth discussions on the situation on the Korean Peninsula and the strengthening of intelligence sharing between the two nations. In Burns’s first visit to South Korea since assuming office as the CIA director, he expressed his respect for Moon’s efforts to maintain peace and stability on the Korean Peninsula, the Blue House stated.

Lu suggested that the CCP has always used North Korea to blackmail the international community indirectly and that North Korea’s recent series of missile launches were likely meant to pressure the U.S. Navy in the Taiwan Strait and the South China Sea, especially related to recent reports of U.S. special forces in Taiwan training Taiwanese soldiers.

Lu also pointed out the “Six-Party Talks” have not made any meaningful progress as the CCP played the opposite role to its intended purpose.