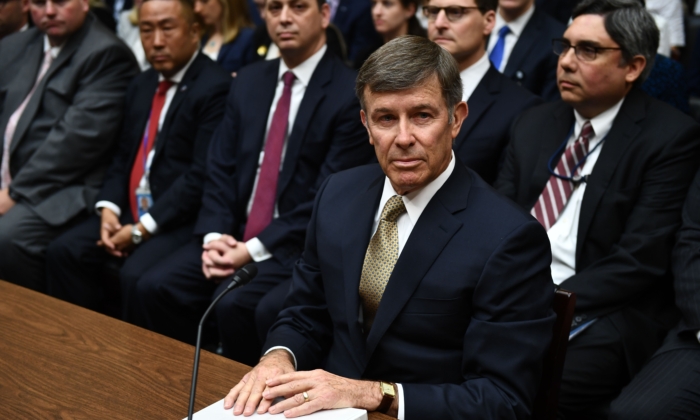 Acting Director of National Intelligence Joseph Maguire waits to testify before a hearing of the House Permanent Select Committee on Intelligence in Washington, on Sept. 26, 2019. (Brendan Smialowski/AFP/Getty Images)
Trump Administration

Acting Director of National Intelligence Joseph Maguire on Sept. 26 defended his handling of the whistleblower complaint at the center of controversy surrounding a call between President Donald Trump and the leader of Ukraine.

Democrats allege that Maguire failed to comply with a whistleblower statute when he didn’t disclose the complaint to lawmakers within seven days. Maguire said he was constrained by concerns about executive privilege and a Justice Department opinion that concluded that the complaint didn’t meet the statutory definition mandating congressional notification.

The White House released the transcript of the call between Trump and Ukrainian President Volodymyr Zelensky on Sept. 25. The content of the transcript debunked several widely circulated media claims, including the allegation that Trump made a promise to Zelensky in exchange for investigating former Vice President Joe Biden and his son, Hunter Biden. The transcript showed that Trump didn’t exert any pressure or float the possibility of a quid-pro-quo.

Maguire told lawmakers he didn’t have the authority to waive executive privilege. Thus, even after the Justice Department informed him that he had the discretion to inform Congress, Maguire continued to work with the White House to resolve executive privilege concerns.

The Department of Justice (DOJ) Office of Legal Counsel reviewed the whistleblower complaint at Maguire’s request and determined that the substance of the allegations didn’t meet the legal definition of an “urgent concern” outlined in the whistleblower statute because the content didn’t implicate intelligence matters under the purview of Maguire.

The director of national intelligence also worked with the ICIG to refer the complaint to the DOJ for criminal investigation. The DOJ determined that no further action was warranted.

Maguire testified that he believes that both the ICIG and the whistleblower acted in good faith and went by the book in handling the complaint. He noted that the complexity and the circumstances of the matter at hand were unprecedented.

The House Intelligence Committee released a copy of the complaint shortly before the hearing featuring Maguire. House Intelligence Committee Chairman Adam Schiff (D-Calif.), who supported for nearly two years the allegation that Trump colluded with Russia, alleged that the complaint and the transcript are evidence that Trump failed to “protect and defend the Constitution.”

“This latest gambit by the Democrats to overturn the people’s mandate is unhinged and dangerous. They should end this entire grotesque spectacle and get back to work, to solving problems,” Nunes said.

The ICIG determined, in the same sentence in which the “arguable political bias” was mentioned, that the complaint was credible.

The declassified complaint alleges, among other matters, that the White House worked to shield the contents of the call, including the full transcript of the conversation.

The whistleblower also claims that U.S. Special Representative for Ukraine Negotiations Kurt Volker met with Zelensky in Ukraine and provided advice to Zelensky and other leaders about how best to follow Trump’s requests for probes into CrowdStrike and Joe Biden.

Trump criticized Schiff after watching part of the hearing, saying the California lawmaker was “making up stories.” Schiff, while appearing to read from the transcript of the phone call, added words and invented dialogue. Schiff later claimed what he did was part of a “parody” of what Trump said.

Speaking to reporters just before 1 p.m. on Sept. 26, Trump said: “I just watched a little of the news on TV. It’s a disgrace. It’s Adam Schiff making up stories.”

House Speaker Nancy Pelosi cited the controversy surrounding the whistleblower complaint as the reason for initiating a formal impeachment inquiry. Democrats have been heading down the path of impeachment for months after winning a majority in the House of Representatives in the midterm elections in 2018.

Pelosi made the impeachment proceedings announcement before the transcript of Trump’s call and the copy of the whistleblower complaint were made public. She accused Trump of using his office for political gain against an election opponent.

Trump accused Democrats of using impeachment because they expect that he will be reelected in 2020.

“Democrats are going lose the election, and they know it. That’s why they are doing it. It should never be allowed,” the president said.