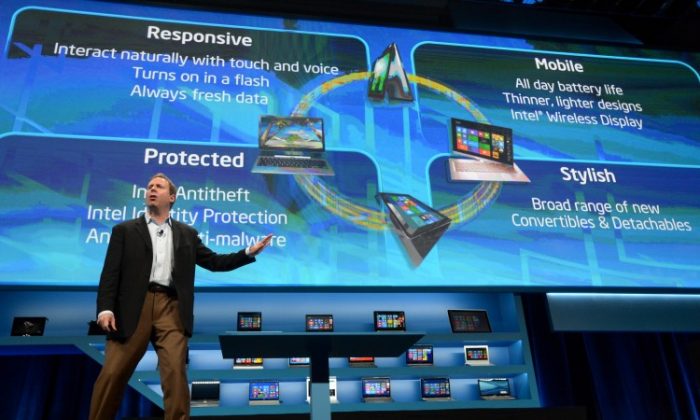 Kirk Skaugen of Intel announces new products at the 2013 CES in Las Vegas. Intel confirmed that it is coming out with a smart TV. (Joe Klamar/AFP/Getty Images)
Tech

Intel Getting Into The Smart TV Business

Rumors are finally proven to be true. Intel is coming up with its own TV set-top box and services, delivered through the internet. The company, Intel Media, will provide live TV and on-demand content.

“We have been working for around a year now to setup Intel Media … We’re aiming to develop an internet television platform. My opinion is that not many of those rivals (Apple, Google, Roku) have cracked it — have truly delivered” said Erik Huggers, Corporate VP & GM for Intel Media said at D:Dive Into Media 2013 last Tuesday.

Huggers is looking at Intel improving services like channel listing grids, content discovery, motion sense controls and interactivity. “For the first time, we’ll deliver a few things to consumers. We’ll deliver a new consumer electronics product under a new brand. It’s associated with Intel, but you’ll have to wait to hear what exactly that is. It’ll be an Intel-powered device with beautiful industrial design. Where it really gets interesting is here — we’re working with the entire industry. It’s an over-the-top service, delivering network channels, pay-TV channels, catch-up television, on-demand, and a host of applications.”

Answering Host Walt Mossberg’s question regarding the bundling of TV channels that are existing now and Intel’s services, Huggers replied that the consumer is still not ready for “a la carte” services and that if the bundles are packaged right, it’s still a real value proposition.

Intel hardware comes with a built-in camera which has not gone well with some for fear of loss of privacy. But Huggers’ argument about the issue made sense for advertisers who’re always looking for innovative ways to capture the right audience. He said, “When my family uses Netflix, we have a household account. My kids may watch programming geared towards them, and I’ll watch programming geared towards me. If there’s a way to distinguish who is watching what, advertisers can then target ads at the proper parties.”

Slowdown in PC shipments had forced Intel, the world leader in chip manufacturing, to enter into the TV business although their earlier attempts have not been successful. For instance, the TV-optimized chips they supplied to Google TV set-top boxes like Logitech’s Revue and Sony’s TVs were not widely accepted and were eventually replaced with ARM processors.

Intel TV won’t be a value play though. The subscription won’t reduce your existing TV bills. It’s rather a take on quality play the result of which needs to played out. We will have to wait and see as the TV box will be launched later in the year.