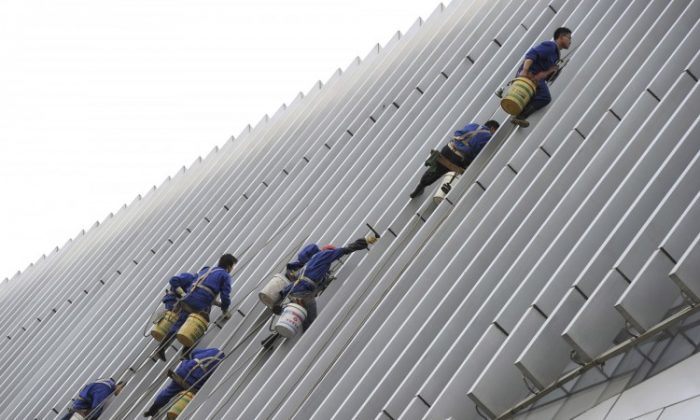 Workers clean the facade of a building in Beijing on June 2, 2012. China's export-driven economy has begun to slow this year. (Liu Jin/AFP/GettyImages)
China

Having failed to meet revenue projections this year, local governments around China are turning to businesses for a hand. But not in the form of loans: instead they are practicing widespread extortion under the guise of fines and “administrative fees,” according to analysts.

The most acute instance so far has been in the northeastern city of Shenyang, Liaoning Province, where the arbitrary fines levied by local official led to the mass closure of thousands of businesses. But the malaise had spread beyond the the northeast.

Ms. Chen, a senior financial adviser in Shanghai, in an interview with The Epoch Times complained about how the fines in her city have changed. “There are a large variety of fines and fees now,” Chen said, “Many companies ran into trouble. The bureau of commerce and industry likes to fine. They have a quota, but if you ask them, they won’t admit it.”

The sluggish economy faces, among other things, a sharp drop in land sale revenue due to tightening in the property market. So local governments are trying to find other ways to meet their target to aid their performance.

Professor An Tifu from the People’s University of China said that in 2009 when the economy declined sharply, many experts thought local government would fail to meet their target fiscal revenue. However, all local governments managed to meet it by increasing levies and non-tax revenue, said An, according to Beijing Business Today.

Non-tax revenue is convenient for local government: it includes administrative fees and fines, and can be levied arbitrarily and on short notice.

To fill the revenue shortfalls, local officials in some areas began demanding money from businesses under the guise of collecting fines and fees. This led to strikes.

In July, authorities in Shenyang in northeastern China launched a fine-writing campaign under the guise of cracking down on piracy, forcing a mass businesses to shut down. Some observers said the campaign was launched to collect financial support to host the 12th National Games of China in 2013.

Last year, Huaibin city in Henan Province took the creative step of allowing transport drivers to prepay their traffic fines. According to Beijing News, drivers purchase a monthly pass that allows them to exceed national weight limits and not be fined. Local officials said the full revenue will be given to the treasury, but similar ad hoc schemes have opened the door for embezzlement.

Wu Fan, Chief Editor of China Affairs, said in an interview with The Epoch Times that the slow economy and a declining property market has forced many local governments to tighten their belts. Some even have difficulties paying salaries.

“Tax revenue, fees and fines have become the most convenient ways to generate income,” Wu said. “As the economy continues to deteriorate, local governments will most likely push for more fine-writing campaigns in the second half of the year.”

He Qinglian, a prominent Chinese economist, has been following the saga closely and issuing biting commentaries with links to news article on her Twitter feed. She referred to the local government in Shaoyang, Hebei Province, hiring 1,000 “chengguan,” or street cops, to issue fines like they were going out of fashion.

“Tell me everyone, is this a group of bandits, or a government? In the Republican Era the bandits at least knew you had to raise the chicken to take its eggs; they discussed the rents they would take, and they protected local business. Now the government has become bandits protected by the law.”