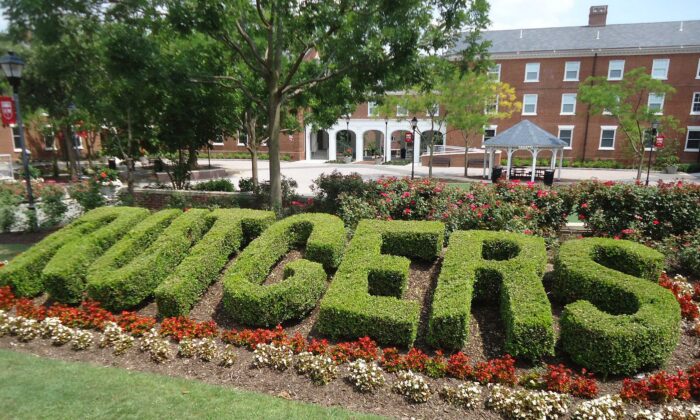 "Rutgers" spelled out in a hedge on the College Avenue campus in New Brunswick, N.J., on July 2016. (Tomwsulcer/Wikimedia Commons)

The English department at Rutgers University, the eighth-oldest university in America, recently went woke. In an email obtained by The College Fix, Rebecca Walkowitz, English department chair, announced to faculty, staff, and students that the department would implement a set of “anti-racist” initiatives. Lest the gullible be led astray by such anodyne phraseology, these initiatives include “limit(ing) emphasis on grammar/sentence-level issues so as to not put students from multilingual, non-standard ‘academic’ English backgrounds at a disadvantage.”

A pedagogical insistence on proper English grammar and syntax, you see, is now racist.

Once upon a time, in those halcyon days before America’s Great Awokening, education was heralded as the best ticket to success. Generations of hardworking immigrants arrived on these shores from the farthest-flung reaches of the globe, toiling away in menial, minimum-wage jobs to provide their children a greater chance at success. They strived to assimilate into our culture and integrate into our politics. Learning the English language was—and still is—a necessary steppingstone.

Alas, the leading lights of Rutgers University would now hold that steppingstone to be a hallmark of insensitivity. What was and still ought to be universally lauded is now condemned as an outmoded bigotry.

The Walkowitz missive represents yet another pawn in our roiling society-wide chess match between the Americanists, preservers of the American regime who rightly prize assimilation as necessary for a functioning body politic, and the civilizational arsonists, who espouse an anti-American, multiculturalist vision of intersectionality. The Rutgers English department rejects “e pluribus unum,” America’s traditional motto of unity, preferring instead to stoke the flames of divisiveness. Worse yet, those Rutgers feigns to help are the very ones who will be most hurt; their odds of assimilating, and therefore building distinctly American lives, will be most hindered.

Shortly before the Rutgers kerfuffle, it was Princeton University—a leading Ivy League light less than 20 miles to Rutgers’ southwest—that offered its own sacrifice at the pagan altar of wokeness. On Independence Day, hundreds of Princeton faculty members co-signed a disgraceful letter to Princeton University President Christopher Eisgruber. That letter, echoing the worst of The New York Times’ mendacious “1619 Project,” baldly asserted that “anti-Blackness is foundational to America.” The letter includes its own overtly racist elements, such as rewarding certain faculty members with extra privileges and perks based on nothing more than their melanin levels.

Princeton classics professor Joshua Katz dissented, penning a public “declaration of independence” four days later on Quillette. For his thoughtful, nuanced rejection of our harrowing new dogma, Katz was denounced in the public square, excoriated by Eisgruber, smeared as “abhorrent” on his own department’s website, publicly threatened with an investigation by a Princeton administration spokesperson, and very nearly “canceled.”

Welcome to the world of American higher education in the year 2020, where up is down, left is right, good is bad, and right is wrong. William F. Buckley Jr.’s 1951 book, “God and Man at Yale,” famously painted a portrait of an elitist, parochial academe at war with America itself. Buckley could not have possibly imagined just how bad the situation would be a full seven decades later. U.S. taxpayers are on the hook—via subsidized student loans, over $1 trillion in student loan debt, calamitously spiked tuition, exacerbated administrator-to-faculty ratios, the hiring of ever-more diversitycrats and the intellectual poisoning of each new generation—for the very rope to hang ourselves.

Let’s be clear about this: We the people, one subsidized student loan and one gender-studies major at a time, are actively complicit in destroying the United States of America. The propagation of a noxious myth about college as an indispensable rite of passage has now come full circle to bite us in the derriere. Each generation that emerges from the smoldering ashes of the once-noble academy is further indoctrinated in insufferable anti-American, anti-Western, self-renouncing claptrap. There is nothing noble about bamboozling, on the taxpayer dime, impressionable teenagers into indebting themselves to major in unemployable “academic disciplines” nonetheless feted by the woke as cutting-edge scholarship.

How long a society can perdure while its educational apparatus is oriented toward churning out heavily indebted pompous ignoramuses is anyone’s guess. But we should not wait to find out. With the possible exception of narrowly targeted investments in science and technology, it is long past time to defund American higher education of every single taxpayer dollar.

Josh Hammer
Josh Hammer, a constitutional attorney by training, is an opinion editor for Newsweek, a podcast contributor with BlazeTV, of counsel at First Liberty Institute, and a syndicated columnist.