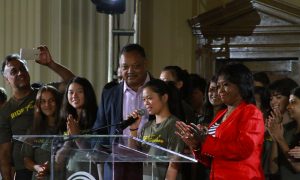 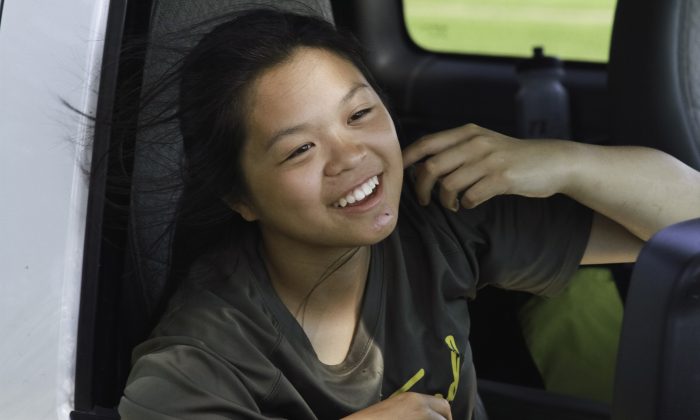 For one member of Ride2Freedom, the 3,000 mile journey has strengthened her resolve to put others first. Annie Chen of Troy, Michigan is 19 years old, and she is leading a team of young cyclists from Los Angeles to Washington to New York. Ultimately, they intend to rescue Falun Gong orphans in China. They intend to stop a human rights crisis that started on July 20, 1999.

Annie said she grew up knowing about the persecution of Falun Gong in China, and had never before had a chance to do something about it directly. She condemns the injustice in China: “If somehow I was born in China … then I would be in their shoes and I would be expelled from school, and I could possibly be orphaned and I wouldn’t be able to express my beliefs freely. It’s not fair at all that someone just like me in China who practices Falun Gong or has a belief in a faith is being persecuted just because she doesn’t live in the United States but lives in communist China.”

She is glad to have the chance to raise awareness of the persecution on the cross-continental bike ride. It started June 1, and the riders expect to reach Washington by July 16, in time for a rally and candlelight vigil marking the start of the persecution.

“I was very glad to see that he could stand by something different, something for a righteous cause like this, and make the right decision.

One special moment on the ride came when a Chinese tourist offered to take a selfie with her. Posting selfies on social media with #Ride2Freedom is one of the ways people support the team and help them raise awareness of the plight of the orphans. For a tourist from communist China, it took courage.

“I was very glad to see that he could stand by something different, something for a righteous cause like this, and make the right decision,” said Annie. She said she felt proud that a Chinese visitor would “do the right thing for themselves.”

The leadership lessons she learned sound good for anyone of any age. For example, the logistics are tricky. Loading tents and luggage and equipment into the vans in the mornings is complicated, but needs to be done fast.

A theme for her is “being able to put others before your self.” She said she could yell at people to hurry up and load the vans, or she could help them pack and bring bags to the vans and help them load in the right order. “There’s a difference between putting others in front or putting yourself in front,” said Annie.

“If you put others in front, things will go smoothly, but if you just want people to do something as you say and not consider others, there is a difference between being a leader and just like a dictator, I guess.”

That unselfish spirit seems to attract people along the way. When she talks to people, “mostly everyone is very supportive of Ride2Freedom.” People are “amazed and blown away” that they are riding across the country on bicycles.

“Then when we tell them more, just not the surface layer of our project, but like our actual mission, our cause, to rescue the orphans and to stop the persecution, they’re even more impressed.

“They are like ‘wow!’ they want to support and they’re willing to take selfies, which is one way to show support,” said Annie.

One of Annie’s fellow riders is Laila Will, from Berlin. She is 16 years old. She said America astonished her. It is her first visit. “I am very excited about it. Before I came here, I couldn’t imagine what it would be like … but it was very beautiful.”

Laila said Americans had welcomed all the riders. “They are very open. Most people are very friendly and when they see us, they even come to us and ask us, ‘What is this Ride2Freedom? What are you doing?’   And this is different than how it is in Germany. I have a very, very positive impression of the people here.”