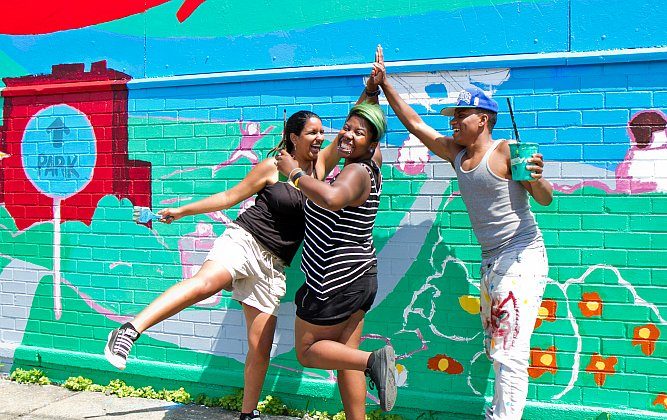 (L-R) Ayhn Gonzalez, Tamika McLean, and Yoiky Brito, do a team "high five" before they start painting the mural on the wall of a nonprofit organization, Rocking the Boat, located in Bronx, N.Y., on Aug. 13. The team has been painting the mural since July. (Benjamin Chasteen/Epoch Times)
New York

Inspiring Hunts Point, One Mural at a Time

NEW YORK—A minimum-wage painting job turned out to be a life-changing experience for 15 Bronx teenagers this summer.

Now, a lustrous green mural stands out next to smokestacks and sooty factories along the Bronx River in Hunts Point.

The mural is on the wall of Rocking the Boat, a nonprofit that teaches economically challenged youth how to build wooden rowboats and sailboats, and restore local urban waterways.

The teenagers painted the mural while working for Groundswell, another nonprofit that has used murals to educate and advocate social change in New York for 15 years.

For Tamika McLean, 16, the process of creating the mural was about much more than just painting.

“Before this, I didn’t know the Bronx had a history,” McLean joked. “I learned so much here.”

Through the program McLean learned about the Bronx River’s origin as a glacier and its history of industrial pollution. McLean said she was very excited to find crabs reproducing recently, because it is a sign of the river’s recovery.

The teenagers also learned about various transportation issues that have plagued Hunts Point.

“A lot of drivers here don’t even know the speed limit is 30 mph because there’s no sign,” said Ayhn Gonzalez, 16.

Due to the lack of signage, many Bronx residents are also unaware of Hunts Point Riverside Park that opened in 2007, and that Rocking the Boat provides free weekend boating events.

“I lived here my whole life and I never knew this was here until this summer,” said Yoiky Brito, 19.

Better Than Designing Ads for Billboards

Two lead artists, Adam Kidder and Jazmine Hayes, led a group of 15 youth to paint the mural, beginning in July. The mural will be completed this Thursday.

Kidder earned his MFA in Illustration from the School of Visual Arts, and was an animator for Comedy Central. He currently designs for advertising agency J. Walter Thompson.

“I like this [Groundswell] better than making billboards to advertise movies, this lasts longer,” he joked. “But I like working with the kids.”

Every year around 800 working-class and low-income students, ages 14 to 21, take part in Groundswell’s summer projects.

This mural is the second in a series of five StreetWise: Hunts Point projects run by Groundswell. It is part of a two-year campaign that incorporates a series of community mural-making projects, to encourage South Bronx residents to identify and prioritize transportation and related environmental concerns.

This fall, the teenagers will recommend design, signage, and policy solutions to the Department of Transportation. They will continue to complete more StreetWise projects next summer.

Although Hunts Point has been notorious for gang violence and prostitution in recent years, the area used to be filled with private estates and mansions—such as that of Richard March Hoe, who invented the rotary printing press in 1843. The private estates were replaced by factories after World War I.

The city decided to move the markets to Hunts Point in the 1960s because of the area’s proximity to railroad. But the decline of railroads led to an increase of motor vehicle use and pollution.

The teenage workers and adult volunteers in Streetwise hope to contribute to positive momentum in the neighborhood today.