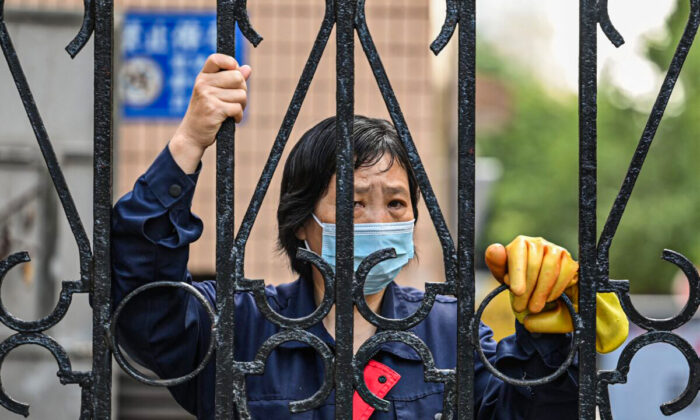 A worker looks past a fence in a compound during a COVID-19 lockdown in the Jing'an district of Shanghai on May 25, 2022. (Hector Retamal/AFP via Getty Images)
INSIDE CHINA

As tens of millions of Shanghai residents continued to suffer under the cruel lockdowns for zero-COVID, some local dignitaries continued to live seemingly unbound by the rules.

In Shanghai’s core urban district, Xuhui, there is a street, Kangping, that is little more than half a mile long. It is the main residential area where Shanghai’s high level cadres live among the ultra-wealthy.

A resident of Kangping told the Chinese edition of The Epoch Times that the area was not been affected during the lockdowns at all.

The resident, Liu Qing (pseudonym), said that residents had been free to move about throughout the city’s lockdown.

He said that the reason why the lockdowns had not been enforced in Kangping was due to political reasons.

According to Lui, an elderly man, who was blocked at a local intersection at the early days of the outbreak, then made a call to Han Zheng, the regime’s vice premier and a member of the Standing Committee of the Politburo, in Beijing, after which Kangping became untouchable.

Han spent nearly 40 years in Shanghai officialdom. He was the mayor and Party secretary of Shanghai before he went to Beijing and became a member of the Standing Committee in 2017.

Liu said, “Everyone knows, especially the police and local authorities, that when two neighbors are in a fight, you need to watch out. You do not know which one has higher connections in Beijing.”

He explained of Kangping, “This is a very special area. Any subtle enforcement of policy could cost you your career.”

“I can guarantee you, within half a mile where I live, there’s no blockade.”

Kangping is a street filled with traditional villas lined with old trees on both sides. It’s well guarded and visitors are forbidden from taking photographs.

Different World for the Privileged

Liu criticized the implementation of zero-COVID policies in Shanghai’s residential areas as being completely out of order, with local officials exploiting their power to the extreme.

“If you ask who and what level of the government gave the order, you won’t find any answer or any official documents. Someone has specifically called the city government and enquired about it, but there’s no record of any sort,” he said.

Mr. Zhu, a veteran in Shanghai’s financial industry who has lived in the city for more than 40 years, told The Epoch Times that the Shanghai authorities are very detailed and precise in their division of people by social class, particularly for those living in high-end communities—the red elites, foreigners, and those with diplomatic backgrounds.

He said that he believes Shanghai’s lockdowns were carried out according to the class of the people that officials were dealing with: “The discrimination is done so that any problem or issue will not get exposed.”

Liu said the chaos in Shanghai’s lockdown has all been caused by bureaucracy.

Referring to the leadership in Shanghai, Liu indicated that as long as the central government in Beijing is happy, the local authorities will remain in their posts.

Therefore, despite people starving to death in the lockdown, “the leaders care for none of it,” Liu said.

Haizhong Ning and Yi Ru contributed to this report.