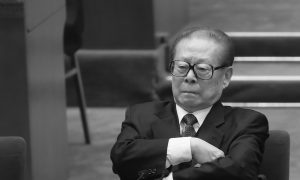 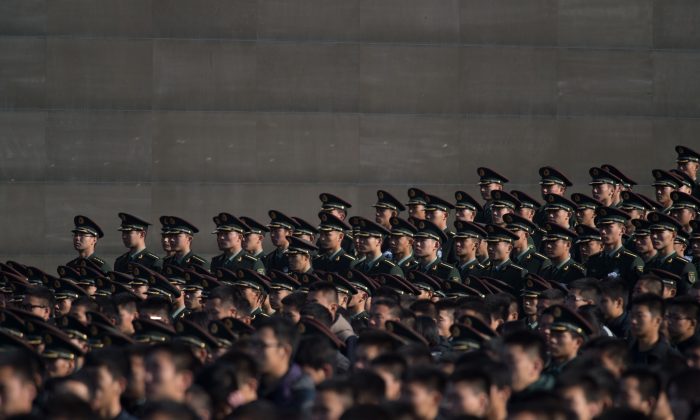 Soldiers of the People's Liberation Army (PLA) attend a memorial ceremony in Nanjing city, Jiangsu province on Dec. 13, 2014. A former office in the Chinese military recently revealed the rampant buying and selling of officer positions in the Chinese military, according to an overseas Chinese-language media. (Johannes Eisele/AFP/Getty Images)
China

The anti-graft campaign in China not only has attacked the officialdom but has also shaken the military—exposing deeply hidden corruption within the People’s Liberation Army (PLA). An insider at the PLA revealed rampant selling of officer positions in the Chinese military, the overseas Chinese language newspaper, World Journal reported on Jan. 16.

The insider who was a former officer at the General Political Department (GPD) of the PLA said that military officer positions were bought and sold during the time when Xu Caihou and Guo Boxiong served as vice chairmen of the Central Military Commission (CMC). Under the two chairmen, the buying and selling of positions became an unspoken rule.

Xu was put under state investigation for corruption in March 2014, and was purged out of the Chinese Communist Party (CCP) in June. Guo retired in 2012, amid rampant rumors about his corruption scandals.

Military officer positions were bought and sold during the time when Xu Caihou and Guo Boxiong served as vice chairmen of the Central Military Commission.

Xu and Guo as the top leaders of the PLA would sell officer positions as a way of colluding with corrupt allies and getting rid of dissidents, the report says. The whole military was demoralized. No one wanted to get down to business but focused on bribing and engaging in relationships instead. Some people in the military who were really capable and who refused to bribe others wouldn’t be promoted, according to the World Journal report.

At a recent military meeting, the Chinese regime leader Xi Jinping gave a statement that implied the rampant corruption in the military.

On Jan. 15, the regime also released a name list of 16 general-level military officers who were sacked in 2014 for corruption. Many of the officers on the list had close ties with Xu and Guo. Some analysts have pointed out that Guo would be the next target of the anti-graft campaign in the military. Both of Xu and Guo are close allies who followed former Chinese communist leader Jiang Zemin.