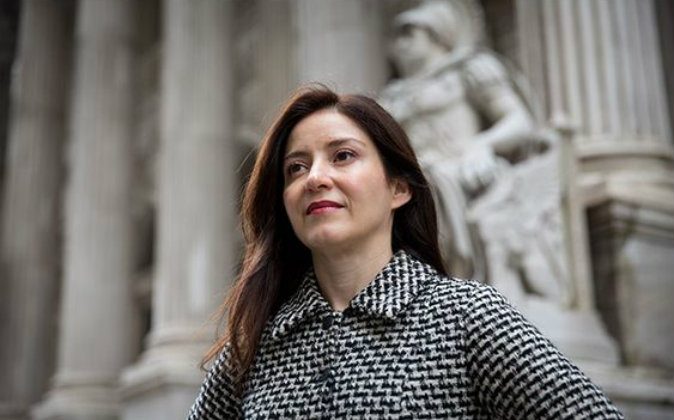 Carmen Seggara joined the New York Fed in late 2011 as part of a new wave of bank examiners. Seven months later, she was fired amid differences about her negative examination of Goldman Sachs. A supervisor told her, "I'm here to change the definition of what a good job is." (Adam Lerner/AP for ProPublica)
New York

Inside the New York Fed: Secret Recordings and a Culture Clash

A confidential report and a fired examiner’s hidden recorder penetrate the cloistered world of Wall Street’s top regulator—and its history of deference to banks.

Barely a year removed from the devastation of the 2008 financial crisis, the president of the Federal Reserve Bank of New York faced a crossroads. Congress had set its sights on reform. The biggest banks in the nation had shown that their failure could threaten the entire financial system. Lawmakers wanted new safeguards.

The Federal Reserve, and, by dint of its location off Wall Street, the New York Fed, was the logical choice to head the effort. Except it had failed miserably in catching the meltdown.

New York Fed President William Dudley had to answer two questions quickly: Why had his institution blown it, and how could it do better? So he called in an outsider, a Columbia University finance professor named David Beim, and granted him unlimited access to investigate. In exchange, the results would remain secret.

After interviews with dozens of New York Fed employees, Beim learned something that surprised even him. The most daunting obstacle the New York Fed faced in overseeing the nation’s biggest financial institutions was its own culture. The New York Fed had become too risk-averse and deferential to the banks it supervised. Its examiners feared contradicting bosses, who too often forced their findings into an institutional consensus that watered down much of what they did.

The report didn’t only highlight problems. Beim provided a path forward. He urged the New York Fed to hire expert examiners who were unafraid to speak up and then encourage them to do so. It was essential, he said, to preventing the next crisis.

A year later, Congress gave the Federal Reserve even more oversight authority. And the New York Fed started hiring specialized examiners to station inside the too-big-to fail institutions, those that posed the most risk to the financial system.

One of the expert examiners it chose wasCarmen Segarra.

Segarra appeared to be exactly what Beim ordered. Passionate and direct, schooled in the Ivy League and at the Sorbonne, she was a lawyer with more than 13 years of experience in compliance – the specialty of helping banks satisfy rules and regulations. The New York Fed placed her inside one of the biggest and, at the time, most controversial banks in the country, Goldman Sachs.

It did not go well. She was fired after only seven months.

As ProPublica reported last year, Segarra sued the New York Fed and her bosses, claiming she was retaliated against for refusing to back down from a negative finding about Goldman Sachs. A judge threw out the case this year without ruling on the merits, saying the facts didn’t fit the statute under which she sued.

At the bottom of a document filed in the case, however, her lawyer disclosed a stunning fact: Segarra had made a series of audio recordings while at the New York Fed. Worried about what she was witnessing, Segarra wanted a record in case events were disputed. So she had purchased a tiny recorder at the Spy Store and began capturing what took place at Goldman and with her bosses.

Segarra ultimately recorded about 46 hours of meetings and conversations with her colleagues. Many of these events document key moments leading to her firing. But against the backdrop of the Beim report, they also offer an intimate study of the New York Fed’s culture at a pivotal moment in its effort to become a more forceful financial supervisor. Fed deliberations, confidential by regulation, rarely become public.

The recordings make clear that some of the cultural obstacles Beim outlined in his report persisted almost three years after he handed his report to Dudley. They portray a New York Fed that is at times reluctant to push hard against Goldman and struggling to define its authority while integrating Segarra and a new corps of expert examiners into a reorganized supervisory scheme.

Segarra became a polarizing personality inside the New York Fed — and a problem for her bosses — in part because she was too outspoken and direct about the issues she saw at both Goldman and the Fed. Some colleagues found her abrasive and complained. Her unwillingness to conform set her on a collision course with higher-ups at the New York Fed and, ultimately, led to her undoing.

In a tense, 40-minute meeting recorded the week before she was fired, Segarra’s boss repeatedly tries to persuade her to change her conclusion that Goldman was missing a policy to handle conflicts of interest. Segarra offered to review her evidence with higher-ups and told her boss she would accept being overruled once her findings were submitted. It wasn’t enough.

“Why do you have to say there’s no policy?” her boss said near the end of the grueling session.

The New York Fed disputes Segarra’s claim that she was fired in retaliation.

“The decision to terminate Ms. Segarra’s employment with the New York Fed was based entirely on performance grounds, not because she raised concerns as a member of any examination team about any institution,” it said in a two-page statement responding toan extensive list of questions from ProPublica and This American Life.

The statement also defends the bank’s record as regulator, saying it has taken steps to incorporate Beim’s recommendations and “provides multiple venues and layers of recourse to help ensure that its employees freely express their views and concerns.”

“The New York Fed,” the statement says, “categorically rejects the allegations being made about the integrity of its supervision of financial institutions.”