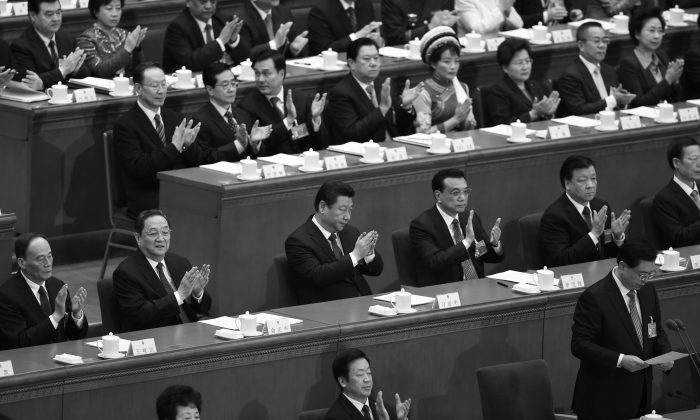 Everything You Wanted to Know About the Fifth Plenum, the Chinese Communist Party’s Secretive Political Meeting

The leadership of the Chinese Communist Party will closet itself in a tightly secured hotel in Beijing for four days this week to plan the running of China for the next five years.

This meeting, called the Fifth Plenary Session of the 18th Congress of the Party, comes at a time of crisis for the Party.

The Shanghai stock market crash in June, and the violent explosion of a chemical warehouse in a residential area in Tianjin in July badly rattled middle-class Chinese, an increasing portion of the population.

Also quaking are the Party upper echelons and state-owned company magnates. Their ranks are being steadily thinned in a grinding anti-corruption campaign started nearly three years ago by Party chief Xi Jinping to root out the sprawling political network left by his predecessor. Analysts previously hinted at the role of associates of Jiang Zemin, the former Party boss, in the stock market crash; and also speculated about Jiang’s people potentially being behind the explosion in Tianjin. These analyses indicate that the highest levels of the regime are still locked in political struggle, making the plenum an important indicator for further changes.

And China’s economy has rapidly slowed down after years of phenomenal growth. Official third-quarter growth figures stand at 6.9 percent, below the full-year growth target of 7 percent.

Unofficially, the situation is dire. China’s economy is only growing at around 3 percent if benchmarked by Chinese Premier Li Keqiang’s favored indicators, railway cargo volume, electricity consumption, and new loans disbursed by banks, according to Credit Suisse.

The Fifth Plenum, which runs from Oct. 26 to Oct. 29, will undoubtedly seek to address the myriad problems plaguing China and the Party.

What Is a Plenum?

A plenum, meaning a “full assembly,” is a meeting where the Party’s Central Committee deliberates and announces policy initiatives and key personnel appointments. It is usually held at least once a year.

The Central Committee, a group of 376 top cadres, is a Party organization that formally screens candidates to elite leadership—the Politburo and Standing Committee—as well as to the Central Military Commission, the top Party military body. The actual selection process, however, is usually made by the incumbent Party chief.

News of the plenum is usually released to the public via a communique to state media after the session closes.

Typically, seven plenums will be held in the five-year span between each session of the Party’s most important political convention, the National Party Congress. (It was the 18th such Congress that saw Xi Jinping come to power in late 2012.)

Major leadership appointments are usually made at the first two plenums, while national and economic plans are made during the third and fifth. The Party’s development is discussed in the fourth plenum, and preparations of the next Party Congress are made in the seventh plenum. The agenda for the penultimate plenum is never fixed.

The theme of the Fourth Plenum of the 18th Congress was the need for the Party to strengthen the rule of law in China. The Central Committee had agreed to weaken local officials’ influence over the legal system, increase government accountability and transparency, and emphasized the importance of China’s Constitution. Despite these ostensibly forward-looking developments, however, the Party maintains that it is above the law and constitution.

How Is This One Different?

Traditionally, Party leadership will settle on the blueprint of the next five-year plan at the fifth plenum. The Chinese regime relies on Soviet-style planning because state-owned companies still play a central role in China’s economy. The National People’s Congress, the Party’s faux legislature, will rubber stamp the new plan for 2016 to 2020 when it convenes next March.

The next five-year plan, the 13th since its inception, is expected to shift China’s growth model toward consumption, and away from its present reliance on exports and investment in infrastructure and industry, according to state media. This, though, has been on the agenda for several years already.

Other potential new policies include agricultural modernization, sustainable development with an eye on the environment, improving the social safety net to help the poor, and the attaining of a “well-off society” by 2020, official propaganda states.

The purging of crucial Central Committee members will be made formal. These include: Ling Jihua, former top aide to ex-Party leader Hu Jintao; Li Dongsheng, the former head of the 610 Office, the Party’s Gestapo-like organization; Jiang Jiemin and Su Shulin, former top officials in the petroleum sector; and Zhou Benshun, the ex-Party secretary of Hebei Province. These men are known associates of the recently purged security chief Zhou Yongkang, and his patron, Jiang Zemin.

Xi Jinping is expected to promote loyalists. In particular, Gen. Liu Yuan, the son of prominent revolutionary leader Liu Shaoqi, has long been tipped to secure an appointment to the Central Military Commission. Liu is said to have furnished intelligence used to implicate Gu Junshan, a protégé of former military deputy head Xu Caihou, of massive corruption.

Xi is also said to be considering modifying a rule that would allow older cadres holding key posts to work past the informal retirement age, which is set at 67. Such a ruling would accommodate Wang Qishan, 67, to retain his job as head of the Party’s anti-corruption agency and continue Xi’s drive to rectify the Party.

China is integrated in the world economy, and its economic policies have the potential for global impact. A consumer-oriented society, for example, could allow developed countries like the United States and the EU to sell products to China—though this has been an unfulfilled promise of the Chinese economy for many years.

Important political changes have also been announced at past plenary sessions, and these can sometimes have a wider impact.

Former Party leader Deng Xiaoping announced the opening up of China’s economy to the world during a plenum in December 1978. And the removal of Zhao Ziyang, a Party general secretary who sympathized with pro-democracy student protesters on Tiananmen Square, was made formal during an extraordinary plenary session in June 1989.

Xi Jinping could use the upcoming plenum to consolidate his power over the Party, while also implementing long-expected structural reforms that allowed for more organic, rather than state-led, economic growth.