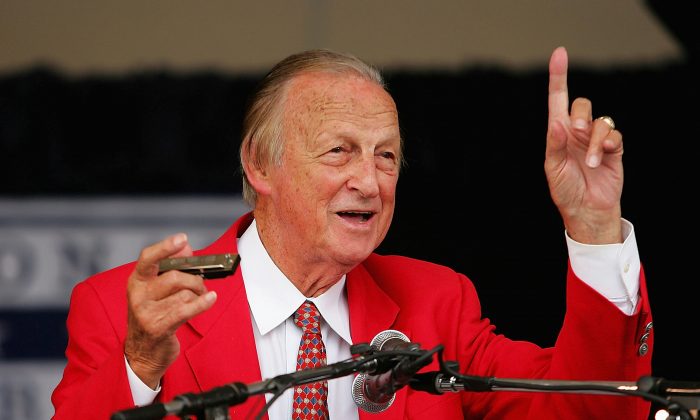 Stan 'Then Man' Musial gets his harmonica ready to sing 'Take Me Out to the Ball Game' during the Baseball Hall of Fame induction ceremony on July 31, 2005 at the Clark Sports Complex in Cooperstown, New York. Ezra Shaw/Getty Images)
12- OBSOLETE

The words and phrases are spoken and written day after day, year after year – generally without any wonderment as to how they became part of the language. All have a history, a story. For those of you who other pieces and wanted more, here is more.  As always, reactions and suggestions always welcome.

MAN, THE (STAN THE MAN): Stanley Frank Musial, St. Louis Cardinal baseball immortal, batted .315 as a rookie in 1942, when he was 21 years old. In 1962, at the age of 41, he hit .330-one point under his lifetime batting average. Musial is the all-time Cardinal leader in games played, runs, hits, doubles, triples, homers, and total bases. His twisted, crouched, coiled stance at the plate enabled him to slash the ball with power or stroke it with finesse to any part of the playing field. Musial was an especially successful hitter in the small confines of Ebbets Field. His specialty was slamming frozen rope doubles off the outfield walls. Dodger fans had difficulty pronouncing his name, sometimes calling him “Musical.” Many of the black Dodger fans simply referred to Musial as “the Man” in tribute to the power and style he displayed. Eventually fans all over the league used this nickname-a reference not only to Musial but to the respect due his power and authority.

MAN NOBODY KNOWS: Catcher Bill Dickey, Yankee immortal, because of his blandness.

MAN OF A THOUSAND CURVES: His nickname was a bit hyperbolic, but the major league batters who swung at his stuff and came up empty might not disagree with it. For Johnny Sain, talented star of the Boston Braves and other teams, curveball pitches were a trademark and the reason for his nickname. He allegedly had such pitching skill that his curves dropped, darted, hesitated, broke wide, broke fast, broke slow, broke twice. There may not have been a thousand curves, but there were enough variations on these curves Sain possessed that the effect on batters was the same (see “SPAHN AND SAIN AND PRAY FOR RAIN”).

MAN O’ WAR: Sam Rice was a fleet-footed outfielder and was called “Man O’ War” after the famous racehorse of his era.

MANDRAKE THE MAGICIAN: During the late 1940s and into the 1950s, Don Mueller of the New York Giants appeared to have a special gift with a bat in his hands. His lifetime batting average was a respectable .296, yet he never led the league in any hitting category. His nickname came from his expert bat-manipulation and his ability to hit the ball where he wanted it to go.

MAJOR: Ralph Houk, for rank held in the Armed Forces and demeanor.

MARVELOUS MARV: Marvin Eugene Throneberry was perhaps born to be a New York Met. His initials spelled out the name and his personality and limited skills underscored the characteristics of the 1962 New York expansion team.  Throneberry, who looked like Mickey Mantle batting but did not get the same results, labored through a seven-year, four-different-team major league career—the Mets were his last team. He is a gentle, fine humored man, and sportswriters hung the nickname on him in good-natured jest. Throneberry loved it and went along with their efforts to depict him as a clown. Once a teammate dropped an easy fly ball. Marvelous Marv smiled and shouted, “What are you trying to do anyway, steal my fans?”

“MASTER BUILDER” IN BASEBALL: Jacob Ruppert, and that he was.

MASTER MELVIN: Mel Ott was a power-armed right fielder for 22 years with the New York Giants. He smashed 511 home runs in a fabled career that saw him average better than a hit a game while compiling a lifetime batting average of .304. Ott became a Giant at the age of 16-and that’s how his nickname came about. Ott’s Hollywood-type beginning was recalled by Eddie Logan, Giants’ equipment manager, who was about the same age as Ott at the time and was sent to pick up the youth: “We had the 9th Avenue El at the time. Mr. McGraw had told him to ride the El to the last stop, which was the Polo Grounds. He took the El the wrong way and wound up at the Battery. I looked for the straw suitcase. I found him. I said, ‘C’mon boy, let’s go.’ He got the biggest thrill riding back on the train.” Labeled “McGraw’s baby,” Ott was in only 35 games in 1926, then 82 in 1927. “He’s too young to play big-league ball,” McGraw said, “but I am afraid to send him to the minors and have a manager there tinker with his unorthodox batting style. The style is natural with him. He’ll get results as soon as he learns about big-league pitching.” And he did.