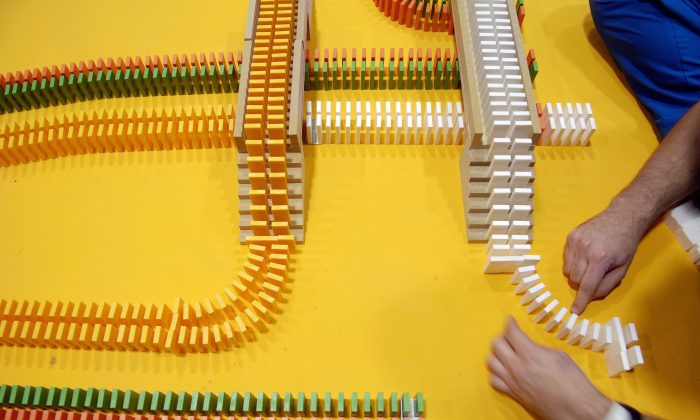 A participant is busy placing the last stones in preparation for Domino D Day, an event that will be held in Leeuwarden, next Friday in an attempt to topple a new world record number of dominos, 14 November 2007. (Hoge Noorden/AFP/Getty Images)
Entertainment

Two of the most inventive domino artists out there—known by the YouTube names Hevesh5 and Millionendollarboy—have released their latest creation. A series of tricks that took them three months to build and involves 20,000 – 25,000 dominoes.

The video is edited to look like one continuous set up, called a “screenlink,” but each trick is in fact independent. So independent, that they were created in two difference countries. The first half of tricks were done by Hevesh5 in the United States, and the second half (at the 1:35 mark) are by Millionendollarboy in Germany.

Hevesh5 writes on his profile that he started domino building in 2009 after he searched “dominoes” on YouTube. “I try to post videos every 2 weeks, but as you can probably tell, these take a while to make,” he says.

Some of Millionendollarboy’s posted personal bests include: