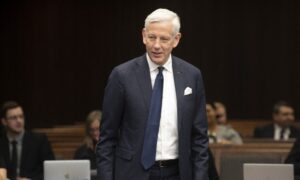 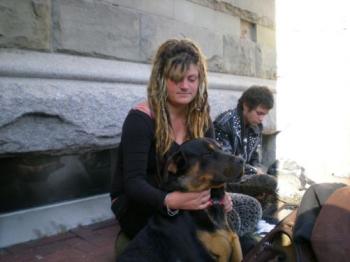 HOMELESS YOUTH: Homelessness continues to rise across the country, affecting even the middle class and those who are employed. (Joan Delaney/The Epoch Times )
Canada

Joan Delaney
Senior Editor, Canadian Edition
Joan Delaney is Senior Editor of the Canadian edition of The Epoch Times based in Toronto. She has been with The Epoch Times in various roles since 2004.
View profile
Follow
biggersmaller
Print
SURREY, British Columbia—Ralph was down on his luck. Although he’d had an arrangement with his ex-partner to make monthly child support payments, that arrangement was not recognized by the courts and 40 per cent of his wages were garnisheed.

One thing led to another and, unable to pay his rent, Ralph became homeless and soon lost his job as well.

It was only after he got help from Project Comeback that Ralph was able to pull himself out of his downward slide and get off the streets that had been his home for almost three months.

Based in Surrey and the only program of its kind in Canada, Project Comeback helps those who are willing and able to work or the working homeless who can’t afford the high rents that are a reality in the Lower Mainland area of British Columbia.

Funded by Service Canada, the program assists people with damage deposits, first month’s rent, work boots — whatever they need to get back on their feet and into housing.

“We see people who are trying very hard to identify work that they can do but of course if you’re not housed it’s very difficult to be rested and prepared to handle a full time job. So it’s a cycle that people get caught in that’s very hard to break out of,” says Marg Yeo, a team leader with Project Comeback.

Though it initially focused on helping homeless day labourers, Project Comeback has expanded to include anyone who wants to work and get out of the homeless cycle.

We serve everyone,” says Evans. “We see people who are trying to deal with mental illness and who are in recovery from addictions; we also see people who don’t have either of those issues.”

Recent years have seen a rapid growth in municipal homeless counts across the country. With those in low-paying jobs barely making ends meet, when things go wrong and they lose their jobs through circumstances beyond their control there is no buffer — no nest egg to fall back on.

While some stay with family or friends, “couch surf,” live in their vehicles or camp out in the bush, others stay in homeless shelters or end up on the street.

Some non-governmental sources estimate Canada’s homeless population (not just those living in emergency shelters) ranges between 200,000 and 300,000, according to a 2007 report by Gordon Laird, a media fellow at the Calgary-based Sheldon Chumir Foundation for Ethics in Leadership.

Whereas single males once dominated those in homeless shelters, homeless people today include women, children, students, immigrants, the mentally ill, seniors, low-income families and even the formerly middle class.

Canada’s “new homeless” can be found everywhere — towns, cities and suburbs — and poverty, not substance abuse or mental illness, is the leading cause of homelessness in Canada, Laird found.

“The inadequate level of the minimum wage, the lack of availability of affordable housing, the inadequate provision of mental health care — these are some of the reasons why we’ve got such a crisis in homelessness in Canada.”

With an election campaign in full swing and a recent poll showing that poverty is one of the top issues on voters’ minds behind health care, the economy and the environment, the main parties have unveiled their various strategies to reduce poverty.

But Howlett says comprehensive poverty reduction strategies already in operation in Quebec and Newfoundland and being considered for Ontario are proving to be an “efficient way to tackle the problem.”

The strategies cover different approaches, including implementing prevention measures, promoting access to employment, strengthening the social and economic safety net and encouraging the involvement of society as a whole in combating poverty.

“They’re able to target investments in the area where you get the most bang for your buck and where governments will actually save money in other areas even though they’re investing more in the poverty reduction area,” says Howlett.

Canada’s national affordable housing program was cut in 1993, and many poverty groups say if the growing tide of homelessness is to be stemmed a national housing strategy is vital.

“If the federal government gets back into the subsidized housing world, that will make an enormous difference,” says Catherine Evans, a partner in Ethos Strategy Group, a research and public relations firm that works on issues such as poverty and homelessness.

According to a report by the Canadian Council on Social development, almost one-quarter of Canadian households — more than 2,700,000 households — are “paying too much of their income to keep a roof over their heads.”

“People are homeless because they can’t afford a place to live, and the number of working homeless is testament to that,” says Evans.

Meanwhile, efforts to improve life for the homeless continue at the community level across the country. Project Comeback and Ethos Strategy Group are taking part in a “Homeless Action Week” to be held throughout B.C. October 12-19.

The effort is a public awareness campaign to focus on and find solutions to homelessness. Numerous volunteers have been mobilized to support the event, and some organizations will use the week to recruit volunteers for the rest of the year.

On one day during the week there will be a “homeless connect event” in which service providers bring together a whole array of services that are designed to support people who are homeless in making the transition off the street and into housing.

“We are engaging people directly in service to people who are homeless,” says Evans. “We invite more public participation and through that encourage people to understand that homelessness is not something we have to neglect — we can end it.”