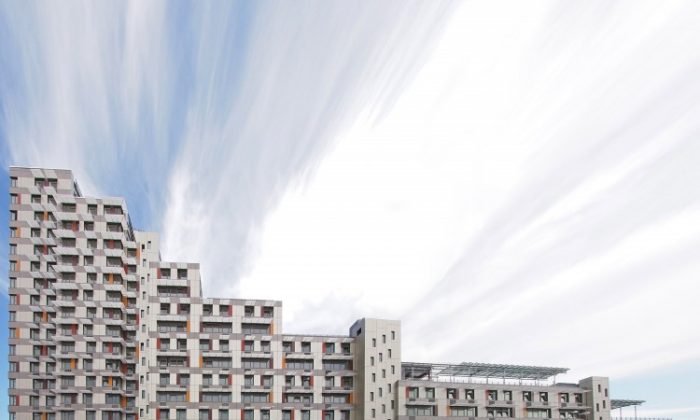 An artist's rendering of the Battery SeaGlass Carousel at the Battery at night-time. The construction company Pavarini McGovern received one of this year's SMPS Industry Awards for their contribution to Battery Park. (Courtesy WXY architecture + urban design)
US

NEW YORK—The local chapter of the Society for Marketing Professional Services (SMPS) honored last week at its 2012 Industry Awards Gala architects, engineers, and contractors for outstanding achievements in the built environment in and around New York.

Recipients this year created projects that have cast “an indelible mark on the people who come into contact with them.”

There were a variety of projects that were awarded on April 18 at a Gala dinner at Union Square Ballroom. Among them were a theme-based carousel and an affordable housing development.

The Battery SeaGlass Carousel at the Battery is an innovative glass structure that is coming to Battery Park in Lower Manhattan as part of the park’s overall revitalization. Simulating an underwater environment, the carousel is designed in the shape of a nautilus shell, with lights and sounds adding to the ocean-like atmosphere.

The carousel invites “children of all ages” to ride within glowing fish that move up and down on platforms, as if swimming through the sea. According to Alexander V. Bergo, vice president of the award-winning construction company Pavarini McGovern, the carousel will open to the public in the spring of 2013.

Another award at this year’s SMPS Gala went to Dattner Architects as well as Grimshaw Architects for a groundbreaking affordable housing development named Via Verde—The Green Way.

The firms set out to create “a new model for affordable, green and healthy urban living,” according to their website. Inspired by natural forms, a striking feature is its stepped form, ranging from a 20-storey tower at the north to a two-storey townhouse to the south. Construction in the South Bronx was completed this year, opening 222 apartment units.

Via Verde is characterized by several cutting-edge ecological and health-focused attributes, while the 34,000-square-foot green roof garden especially stands out. Intended as a central meeting point of the resident community, the green roof not only offers space for growing food and recreation, but also allows for additional insulation and the harvesting of rainwater.

SMPS is a nationwide professional organization whose mission it is to “advocate for, educate, and connect leaders in the building industry.”