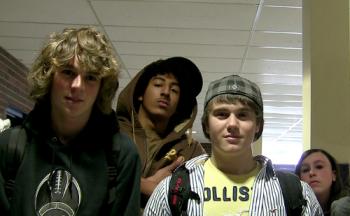 SURROUNDED BY BULLIES: A screen shot from the music video 'Surrounded.' (Courtesy of Alexander Kim and Kenny Leong)
Entertainment

Alexander Kim and Kenny Leong, both passionate about film, have produced a music video for their university image arts project that is not only cool in a unique technological sense but also brings awareness to a weighty social problem they both survived.

In high school they endured daily bullying. Each lost a friend to suicide as a result of bullying and isolation.

Alex’s friend shot himself in Grade 11.

“I understand his situation. I was able to take it and I stood up. It was really great for me because I had a friend who would help me through it. My friend who committed suicide didn’t have that. And that’s why we made the installation,” said Alex, a student in his fourth year at Ryerson University’s Image Arts program.

The “installation” is a 360-degree immersive film environment, entitled “Surrounded,” that encircles the viewers with four video screens and tells the story of a Grade 10 student who is bullied at school.

The effect aims to let people experience directly how it feels to be bullied.

“There are bullies and bystanders—the people who walk around. They notice it but they don’t do anything. They start surrounding you and walking around you. We filmed it so that it seems like you are in the middle of it, and you are being surrounded by all these bullies and they’re all throwing things, saying mean things to you, and pushing you.”

Combined with music lyrics entitled “Dead End,” the 10-minute production presents an interactive way of using film and song to draw the audience into the character’s lived experience and to compel change.

Through their project, Alex and Kenny hope to let victims of bullying know that there are people who do care. Moreover, “it’s to help people understand the effects of bullying and how much you can do to prevent it.”

“Surrounded” is one of 14 projects featured in META, Ryerson’s Fourth Year New Media Exhibition to be held April 16 to 18 in Toronto in the historic Burroughes Building. The exhibition will showcase the best of the artworks by the graduating students from Ryerson’s School of Image Arts who specialize in new media.

It emphasizes interactivity and audience participation to allow people to create individual aesthetic experiences, engaging different senses and using their own powers of observation and imagination.

Through works such as sculptures, puzzles, maps, games, and film, the projects in the exhibition include themes from geography, history, and culture to science, the environment, and more.

The technique of POV, which stands for “point of view,” is “a huge part of our project,” said Alex. In POV, the camera shows what the character sees, like in the movies “The Blair Witch Project” and “Cloverfield.”

Kenny is fascinated with POVs while Alex’s interest lies with the 360-degree environment. The concept of new media inspired the pair to produce artworks that are more interactive, and to master the complexity of the four-camera format, transcending the boundaries delimited by the traditional single flat screen.

“In our four screens, one screen might just be the POV. On another screen, you might see him being bullied. Somewhere else it’s a different angle.”

“Surrounded” was also the result of “huge” support from Alex’s old high school, Sir John A. MacDonald. Alex talked to the principal and drama teacher and they were nice enough to dedicate six classes plus additional time for his team to film at the school, he said.

All the actors are drama students in grades nine and ten selected through auditions, including Cameron Heath, who plays the main character with the same name in the video.

Music production is by Christopher Radigan, another high school friend who is now studying media arts at University of Western Ontario.

‘Even just having one friend does so much’

After his friend’s death, Alex always thought about what led to his suicide, and what could have prevented it.

“Life is so great. No matter how bad it could be, there can be something that can change it and make your life better,” he said.

For Alex, it was definitely friends that helped.

“People noticing you and talking to you help so much in confidence. Even just having one friend does so much—someone just simply going, ‘leave him alone.’ It’s so powerful.”

He had one friend mainly who helped him out, and through that friend, he found more friends.

Noting that bullying happens not only in the teenage years but also to younger children and in workplaces and elsewhere, Alex believes that the most vulnerable stage is in high school, especially during the early years of grades nine and ten.

With music videos being such a popular medium today, Kenny and Alex hope the artistic appeal and unique four-screen configuration of “Surrounded” will particularly attract that age group.

They also hope to show their music video to many more people.

Their main message is that “any little thing can help to save a person’s life. [But] if you don’t try to stop it, it will do more than you can think, that’s how much damage bullying can do.”

META, the Fourth Year New Media Exhibition presented by Ryerson University’s School of Image Arts, will be shown April 16 to 18, 2009, at the historic Burroughes Building, 639 Queen St. West, Toronto. The opening reception will be held from 5 to 8 p.m. on Thursday, April 16. The exhibit will be open from 12 to 6 p.m. on Friday and Saturday, April 17 and 18. For more information please visit www.metaart.ca.