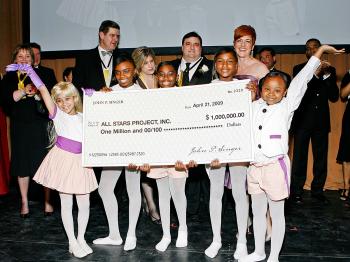 FUNDRAISING FOR KIDS: John and Madlyn Singer, Art Advisors, LLC (4th and 6th from left) present $1,000,000 check to youth of the All Stars Project at the 2009 gala benefit at the Lincoln Center. All Stars Project president and CEO Gabrielle L. Kurlander (2nd L) accepts the check with All Stars Project Hall of Fame honorees. (Erroll Anderson)
US

By Joshua Philipp
Print
NEW YORK—The All Stars Project has helped youth across the nation by helping them harness their talents through performing arts. The non-profit organization held a national gala benefit Tuesday night at New York's Lincoln Center to raise funds for the coming year.

Inner-city kids mingled with more than 400 business and corporate leaders at the classy event, which included an awards ceremony and original performances by some of the project's talented youth. They later showed their skills through song, music, and spoken word, and received standing ovations from the crowd.

They raised more than $1.3 million at the night's event.

“We use performance onstage to help people grow and develop,” said Gabrielle Kurlander, president and CEO of ASP during a cocktail party just prior to the main event.

She added that they help kid accomplish goals that would otherwise be unattainable, encouraging them to go beyond where they are. Kurlander added that normally, “kids from poor communities don't have these kinds of opportunities.”

The All Stars Project (ASP) reaches out to kids in poor neighborhoods and helps them harness their talents through educational and performing arts activities. Their New York branch is based out of their Performing Arts and Development Center on 42nd Street and has programs throughout the five boroughs.

ASP was started in 1981 and has since helped tens of thousands of kids throughout New York and several cities across the U.S.

They bring together kids from all races, religions, and backgrounds—helping them do something positive by working together. Some of the kids say ASP changed their lives.

Will Farris, 26, has been with All Stars for nine years. He said that in the community where he comes from, many kids come from broken homes and sometimes turn to gangs to find a family. Once they start that path “they have no way out once they go down it,” Farris said.

Brooklyn resident Anton Joyce said he found ASP by accident. He had trouble in school growing up and decided to join a gang, yet was convinced by a friend to go to All Stars instead. “It saved my life,” he said. “Some of my friends didn't live to see their 21st birthdays.”

Joyce said that all stars helps kids with the “little things most people take for granted,” such as cultivating confidence, being taken seriously, developing social skills, and learning how to live in society. “They find themselves,” he said.

Some kids come to the program for other reasons. Omar Pride, 19, from Long Island City said that his godmother got him involved with All Stars when he was five.

“It motivated me to dance,” Pride said. “It actually affected my whole life.”

“They have a gift from God and if they use it right they can change and can always grow,” Pride said.