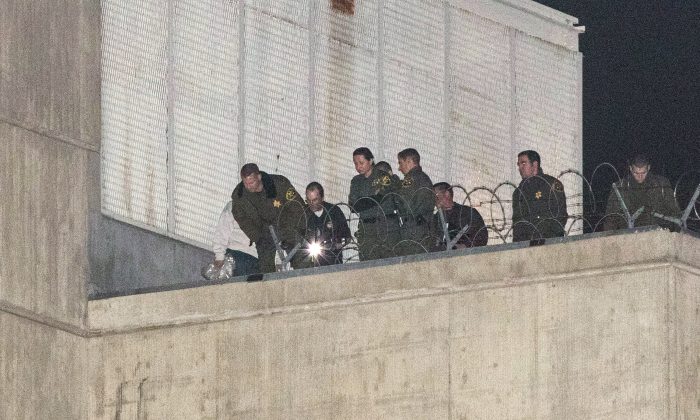 The three jail inmates charged with violent crimes who escaped from the Central Men's Jail in Santa Ana, Calif., on Jan. 23, 2016. (L-R) 37-year-old Hossein Nayeri, charged with kidnapping and torture; 20-year-old Jonathan Tieu, who is charged with murder; and 43-year-old Bac Duong, charged with attempted murder. Sheriff's Lt. Jeff Hallock said Saturday that the inmates were last seen at 5 a.m. on Friday and could have escaped anytime between then and late Friday night. (Orange County Sheriff's Department via AP)
US

LOS ANGELES—Authorities are continuing to search for three inmates who escaped from a Southern California maximum-security jail by cutting through half-inch steel bars and rappelling from the roof by a makeshift rope.

The inmates—one of whom is an alleged killer—were last seen at 5 a.m. Friday at the Orange County Central Men’s Jail in Santa Ana, about 40 miles southeast of Los Angeles. They could have escaped any time between then and late Friday night.

“The inmates cut through half-inch steel bars to facilitate their escape,” Hallock said.

They also cut through plumbing tunnels and finally made it to an unguarded area of the roof where they were able to rappel to the ground using some kind of makeshift rope, Hallock said.

They were last seen wearing orange jail jumpsuits, he said.

The inmates were seen at a 5 a.m. inmate count and were discovered missing at the 8 p.m. count, Hallock said.

Before the nighttime count, there was some kind of disturbance at the jail that may have been part of the escape plan, Hallock said.

It slightly delayed the discovery that the men were missing, he said.

Some “small pieces of evidence” have been collected and investigators will be looking at surveillance camera footage, Hallock said.

Earlier, Hallock said it was the first escape from the 900-inmate facility in 20 years.

Investigators were working around the clock with other county agencies, the FBI and U.S. marshals, Sheriff Sandra Hutchens said in a statement.

“I am confident that this collaborative effort will result in returning these inmates to where they belong- behind bars,” she said.

The inmates include 20-year-old Jonathan Tieu, who had been held on a $1 million bond since October 2013 on charges of murder, attempted murder and shooting at an inhabited dwelling. His case is believed to be gang-related.

Hossein Nayeri, 37, had been held without bond since September 2014 on charges of kidnapping, torture, aggravated mayhem and burglary. Nayeri and three other men are accused of kidnapping a California marijuana dispensary owner in 2012. They drove the dispensary owner to a desert spot where they believed he had hidden money and then cut off his penis, authorities said.

After the crime, Nayeri fled the U.S. to his native Iran, where he remained for several months. He was arrested in Prague in November 2014 while changing flights from Iran to Spain to visit family.

The third escaped inmate, 43-year-old Bac Duong, was being held without bond since last month on charges of attempted murder, assault with a deadly weapon, shooting at an inhabited dwelling, being an ex-felon in possession of a firearm and other charges.

It was unclear whether the men were armed but they should be considered very dangerous, Hallock said.

“I think the public should expect the worst if they’re encountering them and call 911 and allow the professionals to respond,” Hallock said.