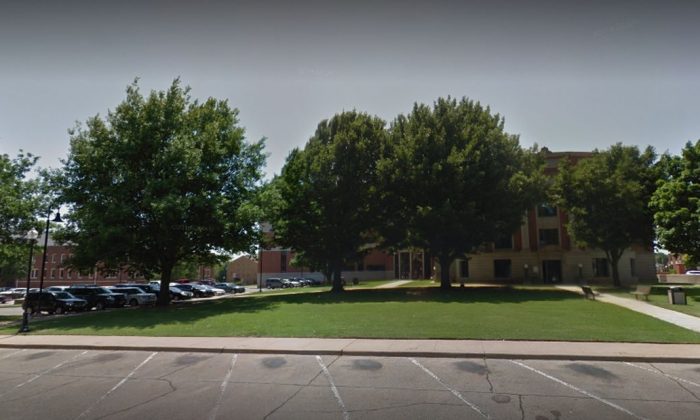 An inmate at an Oklahoma jail is being hailed as a hero for coming to the aid of a detention officer who was attacked by another inmate.

The attack, which was captured on a surveillance camera, took place at the Payne County jail in Oklahoma, according to local media reports at the time.

Tashka Robert Frank Maret, 24, tried to punch the jailer before picking him up and slamming him to the ground, KOCO News reported.

The detention officer then tried to call for backup but the inmate kept attacking him.

A second inmate, who had been sitting on a bench, then stepped in to help the officer.

That inmate, identified as Robert Charles Hammock, grabbed Maret and helped the jailer restrain him as other officers arrived on the scene.

Maret had been originally booked in the jail on larceny and public intoxication charges.

Now, he’s facing a charge of assault on a police officer.

He could be sentenced to a maximum of five years in prison if he’s convicted, KFOR-TV reported.

Captain Kevin Woodward, of Payne County Sheriff’s Office, told KOCO that budget cuts have reduced the number of detention officers in the jail.

“It does make it a little more dangerous for the people,” he noted.

“We certainly wouldn’t want anybody to try and be a good Samaritan and get hurt in the process,” Woodward said, adding that he appreciates Hammock stepping in to help.

Meanwhile, a Texas prison guard recently thanked inmates who helped save his life during a scary incident in 2018.

“I just slumped and went out,” said Gary Grimm, as reported by USA Today. “Next thing I remember is looking up at the ceiling in the ER.”

Grimm was sitting near eight inmates in a locked holding cell when a massive heart attack hit him.

The inmates then started shouting and banging on the cell siding to get another guard’s attention.

Deputies from the courtroom then investigated, the report said.

“Instead of overtaking me and taking my gun, and killing me or taking a hostage and escaping, they looked at me as a human being,” Grimm said.

"Instead of overtaking me and taking my gun, and killing me or taking a hostage and escaping, they looked at me as a…

Grimm said that in two decades on the job, he tries to treat inmates the same way he would want to be treated.

“I don’t care if they’re a drug user, hot check writer … They’re still a human being. I don’t have to like what they did, but it’s not my position to be the judge and jury,” he said.

Grimm, 52, retired from his job due to medical reasons.

“I need that for at least six months, and then maybe we can have a transplant,” he said of surgeries.

Grimm said he would like to thank the imates who saved his life. “I get emotional. If they wished harm for me, all they had to do was sit there and do nothing,” said Grimm.