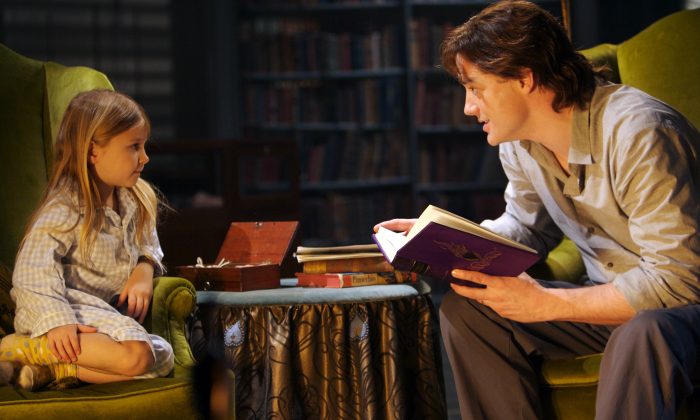 By Matthew Rodgers
Print
You know the old adage about London buses? Well now you can apply it to Brendan Fraser movies, because this is the third time this year that the chiselled chump has portrayed an adventuring family man caught up in a fantastical fable.

Unfairly shunted around the release schedule to avoid “Fraser fatigue” after the terrible Tomb of the Dragon Emperor, and the slightly less terrible Journey to the Center of the Earth, Inkheart finally has its chance in a winter without a Narnia or Potter to gobble up the multiplex screens.

Mo Folcart (Fraser) is a bookbinder, a job which drags him to the four corners of the world searching for an ancient text, with daughter Meggie (Eliza Bennett) reluctantly in tow. The book doesn’t contain riches, or historical value, it contains his imprisoned wife. Known as a Silvertongue, Mo has the gift of bringing the written word to life, with a whole menagerie of creatures and otherworldly characters springing from the pages as he reads. A problem only arises when something must go back into the book in their place.

Inkheart has been crafted with much love and affection. It has a story that unfolds at a gentle pace, as opposed to rushing from set-piece to set-piece, but it never drags. In fact it’s like reading a good book.

Based on the novel by Cornelia Funke, Inkheart makes a stand for what it sees to be the dying medium of the written word. In a world with the interweb, a quick-fix MTV generation, and the annoying way in which people text using lazy acronyms such as “l8rs” (IT’S ONLY THREE EXTRA LETTERS!), Iain Softley’s film takes great pride in promoting the power of prose, rather than going for the fast-food tie in.

The ensemble cast clearly enjoy themselves. Fraser reigns in the cartoonish aspects of his persona to convince as the fallible father figure; Dame Helen Mirren revels in playing the grouchy aunt who gets to ride a unicorn – yes you read that right – and Andy Serkis is pantomime bad guy brilliant as the hissing Capricorn. Stealing the movie entirely, though, is Paul Bettany, playing his rogue anti-hero as though it was an Oscar-worthy production, grounding proceedings with a thoroughly charming turn.

Sadly, a well-meaning agenda doesn’t a make a good movie in itself, and that’s just what this is, a solid slice of family entertainment that won’t change your life. Hey, you might not remember much of it when it’s over, but it’s an enjoyable little distraction while it lasts.