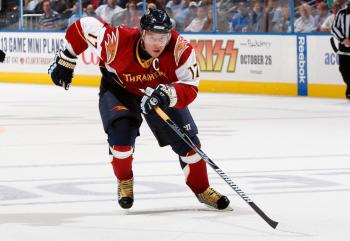 Atlanta's Ilya Kovalchuk, one of the NHL's brightest stars, has been out of action since Oct. 25. (Kevin C. Cox/Getty Images )
Hockey

By Karl Yu
Print
Injuries through the 82-game NHL season are a regular occurrence but having entered the second month of the 2009–10 season, the league is without a large number of its brightest stars due to injury.

Two-time NHL MVP and Washington Capitals left winger Alexander Ovechkin suffered a shoulder injury on Nov. 1, and even though he won’t be missing four to five weeks (as he had initially joked), he will still miss another week.

Ovechkin isn’t the only notable NHLer in the infirmary.

Canadian sports Web site www.tsn.ca, reports that a number of top-flight players are grounded. The site stated last Friday that 126 players were out due to either sickness or injury.

Atlanta Thrashers winger Ilya Kovalchuk has been on injured reserve (IR) since Oct. 25 with a broken foot.

Two Boston Bruins workhorses, left winger Milan Lucic and center Marc Savard, suffered finger and foot injuries respectively in mid-October and both were lost for four to six weeks at the time.

Carolina Hurricanes netminder Cam Ward suffered a deep cut on his left leg this past Saturday and will be out indefinitely.

Detroit Red Wings winger Johan Franzen tore his ACL in early October, had surgery, and is expected to miss a minimum four months.

Art Ross Trophy holder Evgeni Malkin has been out of the Pittsburgh Penguins lineup since Oct. 29 thanks to a strained shoulder, although he is expected back shortly.

Vancouver Canucks goalie Roberto Luongo missed six games with a fractured rib but is expected to return soon according to the Vancouver Sun.

Tim Wharnsby from www.cbc.ca estimates that teams lose 200 to 300 man-games due to injury a season and teams could surpass that at the end of 2009–10—the Canucks had lost an NHL-high 96 through 18 games as of last Saturday.

In fact, according to data from CBC Sports, 27 of the 30 teams in the NHL have reached the double-digit mark in man-games lost as of the end of last week—the Tampa Bay Lightning lost a league low five man-games and numbers were not provided for the Columbus Blue Jackets or the New York Islanders.

There isn’t any way to prevent someone from suffering a shoulder injury from a clean hit—short of removing body-checking and the physical play from the NHL altogether—and the injury suffered by Cam Ward, as freakish as it was, is a fairly rare occurrence.

Many hockey fans love the sport for the physicality and taking away hitting would be the death-knell for the league.

But what is the reason for all the injuries so early in the season?

After the 2004–05 lockout, the league sought to remove the clutching and grabbing from the game that had become commonplace since the New Jersey Devils captured the Stanley Cup in 1995 and ushered in the period known as the “Dead Puck Era.”

The removal of such elements is a double-edged sword says Michael Russo on www.startribune.com, “because you can’t hold guys up on the forecheck anymore, today’s checks are power-packed. Two hundred-pound guys are skating into other players at 30 miles per hour.”

The NHL is going into its third season with its new clutch-free rules however and this is the first time there have been so many stars out so early in the season.

Injuries will always happen in professional hockey and the fact that Ovechkin and Malkin are out at the same time is merely an anomaly, so people needn’t fret.

As Detroit Red Wings GM Ken Holland said, the injuries are a result of the nature of the game.

“If there were 85 people out with the same injury, then I would say let’s study it,” Holland told the CBC.

“But a lot of these injuries are the result of this being a physical game.”